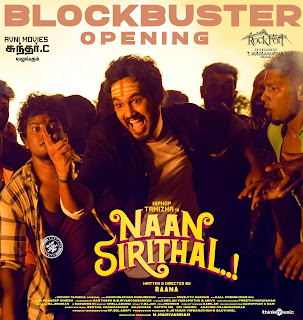 Gandhi ( Adhi) has a strange disorder. He starts laughing when faced by emotional stress or happiness.  His father ( Badava Gopi) is at his wits end, trying to help him. In the midst of his chaotic life thanks to this condition, Gandhi lands up in serious trouble with a bunch of dons ( KS Ravikumar and Ravi Mariya, well cast) baying forvhis blood, due to mistaken identities. Adding to his problems is his lady love's  ( Iswarya Menon) dad who refuses to marry his daughter to him. Does Gandhi manage to save his own life from the dons  and get the girl too?

The film has an interesting premise and Adhi pulls it off well, with just the right amount of innocence, pathos and laughter. Iswarya Menon looks glam and acts well.

The team of Irumai Sani Vijay, Muniskanth, Sha Ra and others keep the laughs coming. Yogi Vabu's track and tik tok videos work well, as does the final climax scene. The mistaken identity portions and the scene in the shopping mart are done well. The screenplay is well paced. Badava Gopi in a serious role as dad is a good choice. His transformation at the prospective bride's house shows him in his element. KS Ravikumar as the flamboyant don does a good job.  Good casting is a major plus for the film.

On the flip side, few songs ( though well shot, peppy tracks) seem forced just to tick the right boxes. The exam and office portions seem to drag on a bit while Adhi trying to simulate laughter in a few scenes seems quite an effort for him and a trying watch for us.