Its no easy task to remake Vicky Donor, (a Hindi film based on sperm donation), in Tamil, fitting it in with local sensibilities.
But debut director Krishna Marimuthu manages to pull it off very successfully,  aided by a superbly handpicked cast, loads of dignity and oodles of understated class.

Fertility expert Dr Kannadasan ( Vivekh in a brilliant performance) is ecstatic when he runs into the perfect potential but reluctant sperm donor , Prabhu ( Harish Kalyan in a career best act). When every effort to convince him fails, things look up when a personal issue helps Prabhu take up Kannadasan's suggestion and he agrees to be the donor who would help couples fulfil their  dream of becoming parents.

But when he decides to marry and his wife ( Tanya Hope in a controlled, poised and dignified performance) learns of this,  along with his mom ( Anupama perfectly cast)  and grandmother ( Sachu in a delightful act), his life begins to go haywire. What happens next? 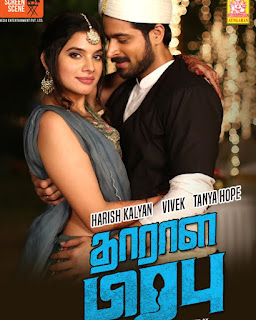 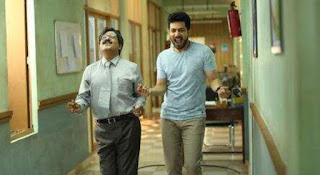 Selvakumar SK's camerawork adds a perfect touch of class to this film, making it a visual delight. The art department further adds to the picture, giving every scene greater authenticity and credibility, becit the homes, clinic or work spots. The choice of locations for each scene is another plus.  All this adds up to making the film a class act,  an important factor,  keeping in mind the sensitive nature of the topic.  Director Krishna avoids any whiff of sleaze and has succeeded in dealing with a taboo topic, with a great deal of sensitivity, sans melodrama. Kudos to a brilliant new director in Kollywood who seems to have effortlessly transformed Vicky Donor, adapting it to K Town sensibilities. Full credit to the sound engineers for adding to the atmosphere of the film,  in keeping things low key and never in your face.

Vivekh is the pillar of the film,  with his witty, emotional and highly credible act, contributing greatly to the successful adaptation. Its difficult to imagine anyone else being able to pull this off and again it reflects on the director's foresight in going in for such a casting.   One walks out wishing more character roles would be written for Vivekh in future.
Harish Kalyan as Prabhu is perfectly cast. He pulls off with his innate charm and innocence, a tough role, managing to keep it dignified and mature, at the same time retaining a certain natural boyish charm. A fine young actor,  whose day has come.  Hope he gets more layered roles written for him in future films.

Bengaluru beauty Tanya Hope's slow and simmering act is refreshing. I quite enjoyed the Kannada/ Coorgi touch in the film.  The wedding scenes especially were a delightful touch. The romance portions seemed natural and quite   refreshingly written.
Anupama and  Sachu brought a certain realness to their characters and I liked the quaint ' beauty parlor' and general atmosphere around the home which seemed to be a cosy and warm world of its own.
The characters seem to breathe in their setting and written in a way that one would remember them even long after.
Several messages are conveyed subtly  without preaching in the film.

The flip side of the film would be a certain sense of slowness in the second half and scenes like  portions of the neighbour crushing on the hero  seemed to add to the length. In some places, one seemed to lose the emotional connect with the characters, due perhaps to a lag in the second half.
Overall,  Dharala Prabhu is a thoroughly engaging watch, a mature topic treated with dignity, emotion, withand superb making.