Set in a village backdrop, the film takes us into the lives of Kannimuthu ( a fine debut by  Mithun Manickam) and Veerayi ( Ramya Pandian immerses herself into the role), a couple who adore their bullocks Vellaiyan and Karuppan, like their own children. One day,  all hell breaks loose when the bulls diasappear. The couple are completely distraught and try every means to find them, but in vain. They are helped in their attempts by a friend ( superb performance by Murugan Vaduvelu). 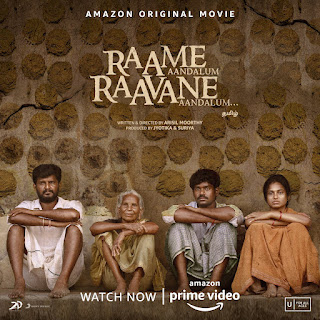 Do the distraught couple get their bulls back?

The film is a political satire with a fine sprinkling of emotion, sentiments and quirky wit, referring to current socio- political issues right from farmers problems, to loans, water scarcity and bureaucratic apathy and even a speech highlighting the importance of knowing your rights and spearheading the developmental change you want to see.

All the  artists fit their roles to a T with their realistic performances and  the screenplay moves at a steady pace to keep the viewer invested.

The man- animal attachment is well brought out with interesting scenes, underlining their bond which forms the basis of the story.

The film avoids a preachy stance, keeping the tone light, but effective. The realistic locations are well chosen and value to the story.

There are places though where Kunnimuthu's search and his antics prove a tad repetitive. Though well-meaning,  the film attempts to comment on too many issues at times.

The film picks up pace towards the end. Watch out for the climax scene with the bulls. A well-intentioned film, rooted in the soil, from Suriya's production house, which keeps you engaged with its attempts to strike a fine balance between drama, sentiment, humor and satire aided by realistic performances.