Singaravelan ( Vijay Sethupathi) has only one aim.  To succeed in politics and rise like his idol, Rayappan ( Parthiepan). To do this he will go to any lengths. His family life is a mess with sister ( Manjima Mohan) not talking to him. But as an unfazed and astute man, he soon rises in the ranks. However, something happens which forces him to stop and take stock of his life and the path he has chosen. What  happens to his well laid plans? 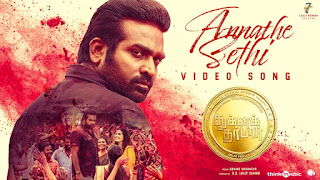 Sethupathi just walks through his role effoertlessly nailing the Jekyll and Hyde variations of his character. Parthiepan is a delight to watch as the verbose, wily politician while Bagavathy Perumal is a scene stealer with his antics.  Manjima however, has a disappointingly limited presence. Raashi Khanna brings some fresh air into the proceedings but the film mainly revolves around Singaravelan and the tussle between good and bad.

The sparring between Sethupathi and Parthiepan are the highlights of the film and the scenes with Bagavathy and Karunakaran add to the fun quotient. 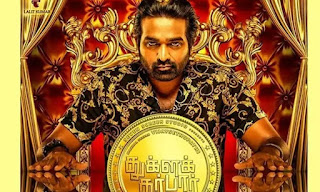 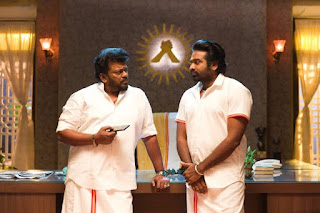 The film touches upon politics but does not delve in too deeply into it. Watch out for the scene with Sathyaraj.  An engaging watch streaming on Netflix.