Chiyaan Vikram's Mahaan, streaming  on Amazon Prime, is the much awaited next Karthik Subbaraj film.

The film centres around an upright Gandhi Mahaan ( Vikram) whose staunch upbringing following Gandhian principles reaches a breaking point at age 40, when circumstances lead him away from the path.  His Gandhian wife Nachi ( Simran) leaves him when he starts drinking, along with her son Dadaboy Naoroji (Dhruv Vikram). 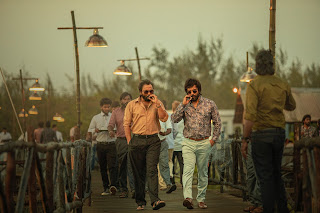 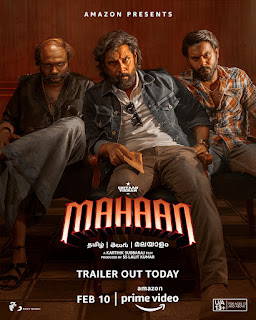 Thereafter, Gandhi Pa as he is called,  embarks on a life of crime and becomes a big liquor magnate with the aid of friend Sathya ( Bobby Simha, brilliant in an aged version). On the other hand,  his son Dada becomes an officer of the law.

What happens when father and son meet? How does the estranged son now react to the father who had abandoned him and his mother? What is Mahaan's reaction and how does he cope to the new situation, with father and son on opposites sides of the law? 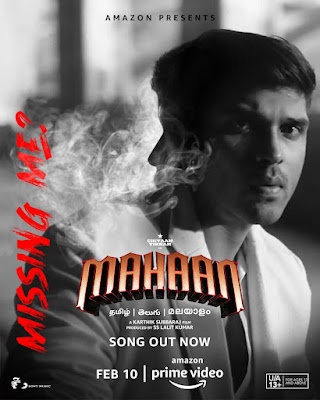 Chiyaan Vikram plays with ease the various stages of his life,  from the forty year old Gandhian, to the older liquor baron, later caught up in the making painstaking decisions when caught up in a tough emotional struggle. A delight to watch in every frame.

Dhruv Vikram matches his dad in every frame with his crisp dialogue delivery, meanacing, stylish, with a power packed performance, superb in the action blocks and the emotional outburst scenes with his dad.

Simran and Bobby Simha play their parts to perfection as do a host of supporting cast.

A revenge action drama, with a unique screenplay, a gangster tale with Shreyas Krishna's eclectic frames, keeps one engaged for the most part, except in places which seems stretched with lengthy dialogues. Santosh Narayan's music is nothing to write home about as such.