An outstanding and impactful film Pariyerum Perumal is a story told in a manner that stays with you long after  you leave the theatre. 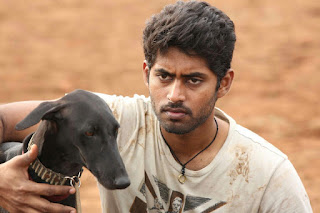 The hero Pariyerum Perumal ( Kathir ) hails from the oppressed  classes. He aims to becone a lawyer in order to be of aid to his oppressed community in the future.

He manages to gain  admission in the Tirunelveli law college  but his lack of English knowledge draws the ire of professors and contempt of peers. Yogi Babu is his good friend in the law college. A classmate,Jothi Mahalaxmi ( Anandhi) befriends the duo and offers to teach  our hero, English.

Their innocent friendship turns to love from her end. Due to circumstances, her father comes to know of her liking for this new friend and the result is a sound thrashing by his relatives for Pari when he goes for a wedding to thier
gathering.  The reason? Caste differences  between them.

The humiliated Pari refrains from disclosing the truth to Jothi and tries to remain aloof. A series of events further highlights the painful truth of prevailing caste differences around him. Does Pari give up on his dream due to the threat to his life  or does he survive forms  the story.

Director Mari Selvaraj debuts with such a powerful film on the fragile socio-economic fabric of our country which delivers multiple messages in a poignant yet entertaining manner without ever preaching.
Yogi Babu is a highlight, seen in a serious role. Kathir walks away with the accolades with his measured and layered performance showcasing pain, despair , dignity and hope in equal measure. Kudos to him for choosing such sensitive and sensible scripts that have the potential to bring about change. Anandhi as the naive yet lovable and loving friend plays her part perfectly. One of the major highligts is the hero's father character. All the supporting cast have only added to make the film the gem it is in the Kollywood crown. Karuppi the dog is an important thread in an unforgettable role. The most chilling of all is the killer thatha for whom honour killings are part of  'his duty' to his community.

The raw landscape of the area is a character by itself wonderfully captured by DOP Sridhar, which captures the barrenness of emotions and opportunities.  Exploring every nook and cranny bringing to life the pain and hopes in equal measure, his camerawork is unstintingly persistant travelling the depth of vision of the director.
Santosh Narayanan's music and bgm are a class apart adding to the magic and message of the film.
Produced by Pa Renjith, the film has all the potential to sweep awards this year. The best part of the film is the beautiful climax. Mari Selvaraj  has managed to make a film which drives home his message without compromising on entertainment nor the signifucance of what he wants to say. A rare feat indeed!