Dhanush is a star and a serious actor - Vetrimaran

- October 10, 2018
The team of Vada Chennai who met the press today, seemed very excited about the film which is set to release  next week. 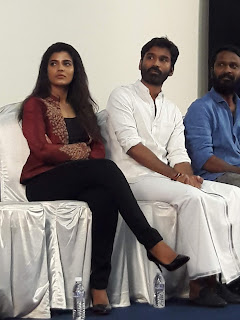 The script was in director Vetrimaaran's mind from past ten years. " It seems like a dream to actually see this film finally ready and set for release,"said Dhanush who stars in the film along with Aishwarya Rajesh and Andrea. 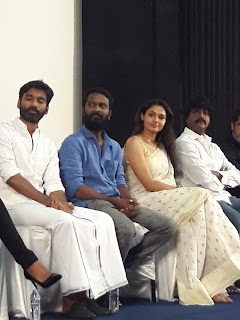 Daniel Balaji and Pavan and Ameer who also star in the film were present along with Santhosh Narayanan who has got Dhanush to sing a song in the album. Velraj is the cameraman, about whom Ameer spoke highly, " He is someone who is always in a state of preparedness for any  shot." 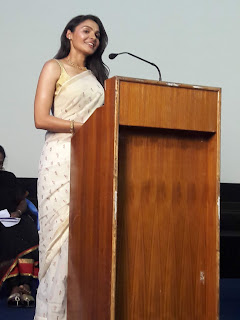 For Aishwarya, the role is touted to be a powerful one. She was however, all praise for her co-stars Dhanush and Andrea. " Any heroine would like to act opposite Dhanush and I am very happy to have got this role. Andrea has done an amazing job."

Director Vetrimaran said that art director Jacky has put up massive sets for the film. "One set was a massive central jail inspired set from  where we set off the film." He revealed that though Simbu and Vijay Sethupathi were supposed to be part of this film, things didn't work out. Kishore and Samudrakani are also part of the cast. "I have been blessed to have such a team who trusts me so much.  I have a big responsibility because of that. Dhanush was enjoying the character  throughout.  He let the character grow to make it what it is. He has got his body language reflecting each age in the film perfect. He is a star but also a serious performer."
Velraj was like an extension of my thought. He would work like a co-director and made things very easy for me. "
One of the challenges of the assistants team was managing the large crowds when shooting on location. Vetrimaran added ,"I enjoy working with directors as actors. Kani has an amazing memory and knew all dialogues of the actors and would give cues. Ameer used to notice and correct smallest errors and movements in the crowds.  Even my assistant team members have worked hard to get the period feel. Even from the garbage in the ground they would remove items  that reflected contemporary times. In close ups that added to the authenticity of the film."

He thanked Dhanush who as producer had given him full freedom and trusted him to bring his dream to fruition. " Even when censors gave us an option to take an A or make cuts and get an U/A I felt it was better to take A and stay true to the film. He agreed with me.
The film will reflect how people evolve and stand up for themselves. This is the first part of Vada Chennai. We will soon start the second part of the film."