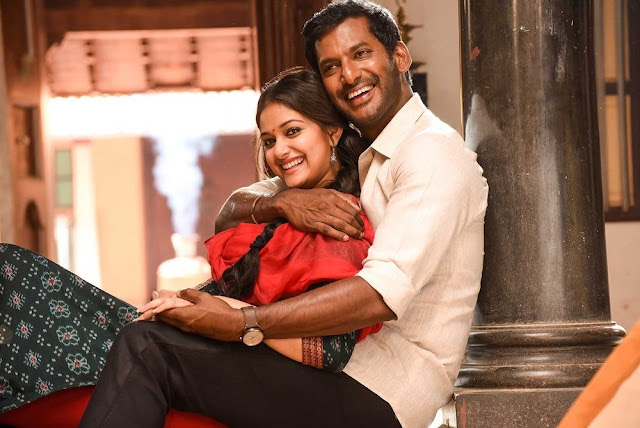 Sandakozhi 2 directed by Lingusamy stars Vishal and Raj Kiran from the original while Keerthy Suresh plays his love interest and Varalakshmi ( Varu ) Sarathkumar, the villain.

The story is set in a village where a Thiruvizha has been scheduled finally after a gap of 7 years, all due to the efforts of Ayya ( Raj Kiran) Due to a series of revenge  killings,  by Pechi's ( Varu) henchmen 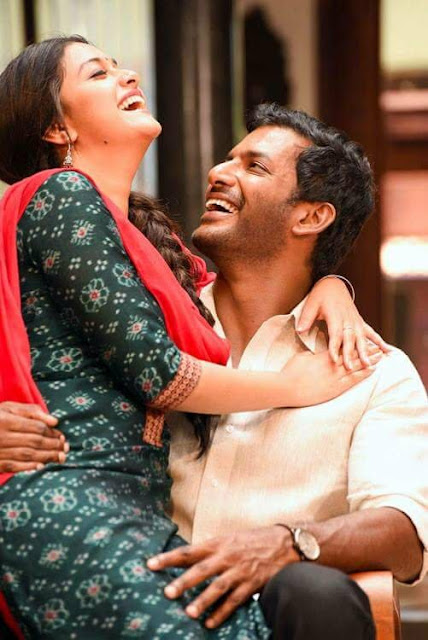 ,
the festival had been banned by authorities earlier. This time, the 7 villages could not afford to have bloodshed or else the 7 day thiruvizha would be cancelled.

But Pechi is hell bent on killing the one remaining survivor from the enemy's family. In the meantime Ayya's son Balu ( Vishal) returns from abroad. He falls in love with Semburathi ( Keerthy), the village teacher's daughter.  Ayya promises her that he will speak to her father to fix the wedding. But he doesnt turn up on the fixed date.

What happens to Ayya? Does Pechi get her revenge? Does Balu succeed as the dutiful son and maintain the dignity and respect of his father in the society that worships him?    The rest of the story answers these questions.

There is a huge star cast including Muniskanth abd Ganja Karuppu, who keep the proceedings  lively. The huge scale of the film, especially the Thiruvizha scenes make for breath taking visuals and add to the grandeur.
Raj Kiran on whose shoulders the film  rests,  is a delight to watch, and makes  a commanding and dignified presence in the film. Vishal' s respect for his  father and thier shared  bond has been well brought out and is a highlight of the film. Vishal has kept his performance subdued and nuanced without starry histrionics, all of which act in favour of the film. His scenes with Keerthy make for good viewing. Keerthy looks perfectly  at   home in the rural set-up and her performance as the chatterbox girl is a delight to watch, never over-stepping, with just the right dose of natural beauty, charm and chemistry with the hero. Her dance moves, especially in the Thiruvizha scenes are to watch out for. She really seems to be enjoying herself!

Varu as the terrifying and revengeful Pechi is well cast, showing yet another dimension of the actor. Speaking just with her eyes or carefully measured words, she excels, making her presence felt in every scene. The film transports you to the rural background it is set in and the way it connects the viewer to every emotion of the characters , is what makes for good viewing.

The film is sprinkled with both emotional  and fun moments with excellent  stunt scenes by Anbariv. Iverall, Sandakozhi2 is commercial entertainer which makes for a good festival family watch.