- November 01, 2018
by Rinku Gupta
Trident Arts is celebrating its silver jubilee abd marked the occasion with a thanksgiving press meet.

Tracing his journey from humble beginnings to the giant today, Trident Arts Ravindran said on the occasion,  "I came to cinema in 1987.I slowly moved up the ladder from film representative to distributor, where I incurred losses and was forced to quit for 4 years. Then I re-started, working as a film mediator between distributors and producers." 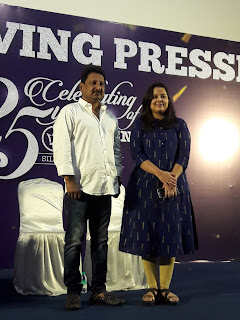 In this period he met his current partner Lathif and together they started Trident Arts in a small 80 sq ft office. 'Porkaalam was our first  big break as distributors. I want to today thank all the producers who have helped me in my journey, especially Roja Combines, Nic Arts and Super Good films. Today we have completed almost 250 films as distributors and it was all possible due to the support of all the producers of the industry."

He added that the company has distributed films of almost every big star in the Southern industry.

"The turn to production came when Sasikumar and others then encouraged us to  turn Producers. Now we are doing 13 films and are getting into into web series as well."
Ravindran's  daughter Soundarya  will now be the next gen of his family entering into cinema,  heading the web series division.