As the title suggests Dhoni Kabadi Kuzhu is a film based on the game of Kabadi. 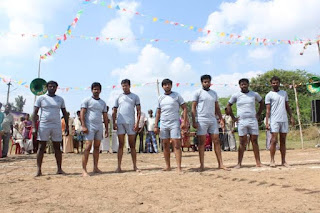 The hero (Abhilash) is a village boy who loves to play cricket with his bunch of friends in the village playground . One day the ground is up for sale and the boys are devastated at the upcoming loss of thier means of sport and entertainment. In a gesture of goodwill the seller says he can sell it to them for a lower price. How can these boys raise 3 lakhs for the bid? Yet they manage to somehow collect 2.8 lakhs by crowd funding. 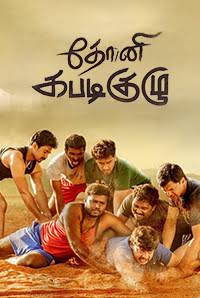 A tea vendor who loves kabadi suggests they can win the remaining Rs 20,000 as prize money for a kabadi championship in another village. How do cricket and Dhoni lovers  change to kabadi ? Do they win the prize money and save the land is the story.

Abhilash and the gang of friends have played their parts well. Leema Babu as his love interest is an asset to the film with her controlled acting and good expressions.
The theme of focussing on Kabadi ( instead of cricket) and the message to love a nationally played ancient game is a good effort by director Iyappan.
There is no unnecessary melodrama in the film.
The kabadi matches are well executed and look real with the team's effort showing in the frame.

The romance angle is not over played in a formulaic manner.
The camerawork and music are additional assets.

However, the comedy scenes could have been better executed as they hardly bring in the laughs.
The villain's reason for revenge seems far fetched. His manner of wreaking vengeance too feels quite impractical and forced.
The hero's dialogues  sound preachy in several places.
Being a sports film , the actors could have been in  better physical form to add to the authenticity and get the right body language of sportsmen.

Too many co-incidences where characters conveniently solve situations through dialogue, make for a loss of tension in screenplay. 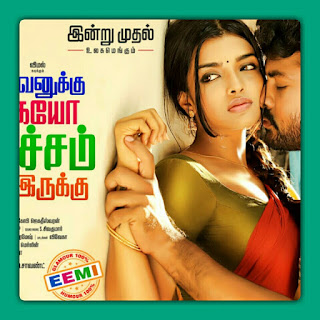 Overall DKK with its message on the significance of sports in daily life as a healthy form of youth entertainment  is a film with its heart in the right place. While  a tauter screenplay and additional thought to the storyline would have added to the appeal if the film, the  makers deserve kudos for choosing a different subject than the usual norm of masala, horror and rom-com genres.