Team Adangu Maru was jubliant at the success meet of the film held on 2nd January. 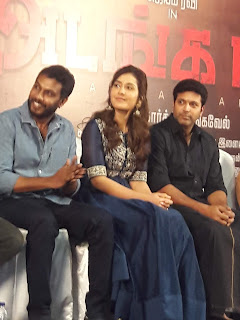 Dialogue writer Viji said, “Recently, when I was talking with Director Mohan Raja sir, he said that he had never seen his brother Ravi so  happy before. "


Actor Mathew Varghese said, “Usually, I am seen in cop roles and working in Adanga Maru was indeed a new experience of playing negative role for the first time."


Actor Mime Gopi said, “Love what you do and it will take care of you soulfully. This has been proved evidently with director Karthik Thangavel, who is filled with positive energy. Jayam Ravi has been such a wonderful person to work with. " 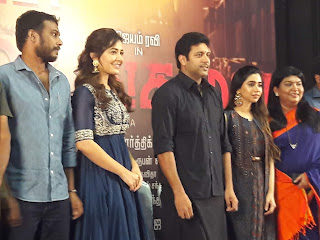 Actor Azhagam Perumal said, “As an audience, I feel that Adanga Maru has  spoken about the contemporary crisis that is prevailing today, especially the sexual crimes. "


Music director Sam CS said, “This is the first ever time I had been to theatre visits and it was a huge response. Of course, we were spellbound over the great response in Madurai and I was even beaten up by cops in the heavy crowds, which I felt  happy about actually since it reflected thier good response!"


Editor Ruben said, “I still remember the moment when Karthik narrated me the script 7  years ago and I am so happy that he could foresee the situations and come up with such a tale 7 years later".


Jayam Ravi’s wife Aarthi said, “Right from the beginning of the film, I was  confident about the film’s success for everyone was filled with so much positivity.”


Actress Raashi Khanna said, “In all the movies, I have done so far, this is the first one to get so many positive reviews. I am so happy to come across the honest reviews of both critics and audiences.” 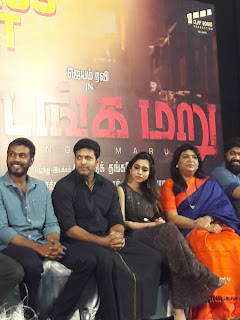 Producer Sujataa Vijaykumar said, “Karthik is so genuine that he is still coming to my office regularly even after release. When I ask him why he is still here when there are already offers awaiting him, he says that the film is still running and he will be there till the shows happen. Karthik has already narrated me a good story and we will produce it once we are done with our current commitments.”


Director Karthik Thangavel said, “Team effort is the only reason why the film has witnessed the positive results. I have been fondly calling Jayam Ravi as Chief as he has been my guide in many things. Even when I had narrated him the script for next film, he suggested to me to work on a different genre and then come back. I thank Sujataa Mam and Anand Joy had taken their prestigious job of getting it towards people. I am so happy that media has done a good job of spreading the positive reviews. Although, there were logical quotients missing here and there, they didn’t take them into account and promoted the film as something beyond the commercial values. I am someone who believes magic works sometimes than logic and this is where Ravi brother as a a chief guided me to proceed likely. Aarthi Mam wasn’t there at shooting spot for single day but her support was incredible.” 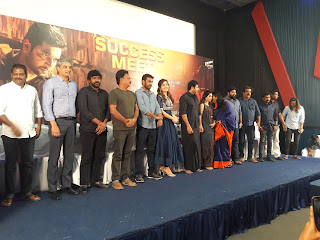 Actor Jayam Ravi said, “I am so much happy to have found the success for Adanga Maru. I have always had a special affinity for media and press, but developed huge respect for them after making Thani Oruvan a good hit. Apparently, I am feeling so much happy about the way they have added Golden touch to this film. When I came across the story of Adanga Maru, I felt nothing special about the film as almost all the stories are repeated ,but it had lots of emotions. I happened to meet Karthik for the first time during the shoot of Ameer’s Aadhi Bhagavan that was a long stretched shooting. But as soon as he came into the spot, the shooting that prolonged for many years wrapped up in a span of one and half months. Here is where I gained huge confidence over Karthik and I immediately wanted to work with him in the near future. Now, we will be soon coming together for one more film as well.”