- February 01, 2019
by Rinku Gupta
Sagaa is the story of young juvenile delinquents and thier struggle to survive and dream of a better life, despite caught up in the net of crime.
The young boys playing the roles are well chosen and do thier part in an exemplary manner, bringing out thier angst, grit and vulnerability fully. The cast includes 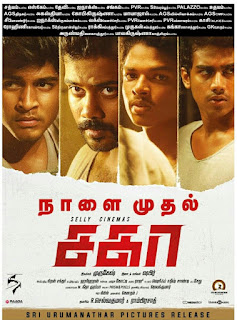 The action sequences are superbly concieved and executed, especially the jail fights.
A few lags like a forced romance scene and songs take away from the tension built up. A little more in depth back stories could have been given in order for us to feel more for the characters.
Overall  director Murugesh deserves credit for choosing a different story and setting to showcase the bonds of friendship in a different manner. Good production values, casting, realistic  action sequences and a racy screenplay make for a good watch.