Produced and directed by R Kannan, Boomerang is an entertainer espousing a cause.
Story in brief:
Shiva ( Atharvaa) injured in a fire, undergoes a face transplant. But his life changes rapidly after that, as he discovers that people are out to kill him. He reckons it must be a case of mistaken  identity,  confusing him because of the face of   Shakti ( previous  Atharvaa whose face was transplanted on him).
As the attempts increase, Shiva is now determined to find the truth and let the perpetrators know that he is not who they mistake him for. This task  leads him to Trichy. There he unravels the past of Shakti, an IT guy turned farmer, who had tried to link rivers and help the village farmers. But vested interests ( Upen Patel) had him killed. Does Shiva avenge the murder? 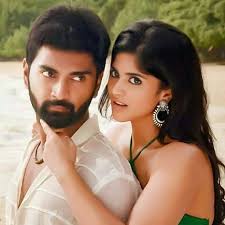 The film has no lags and the screenplay  moves swiftly.  The entire cast ( see list below) has done a good job including Atharvaa in a role cut out for him. He portrays well  the dual roles bringing out the humor, angst, vision, pain and emotions of both characters in equal measure.
Megha Akash makes a good screen pair with him. At no point has Kannan overplayed any sentiment, which is a plus. Good production values make it visually rich
Indhuja and RJ Balaji as Shakti's likeminded friends do justice to thier roles. The social  message is brought out impactfully without preaching. The face transplant portions and the tensions caused by it and the mystery that unravels are seamlessly and interestingly brought out. Upen Patel as the suave International corporate villain fits perfectly into the role. The facet of going back to farming as a NewAge option for young professionals is well highligted.

On the flip side, some of Sathish jokes and comments about women look jaded and  can hardly be called comedy.  The issue of river linking seems to have been left unsolved. The way the heroine is seen choosing the hero only because of hos good looks is a tad unpalatable.
Lip synch problems seem to crop up here and there. The love song though well shot slows the film. The new face doesnt seem to cause much changes in the hero's daily life apart from  the attempts on his life. Hes just seen normally going about his life. He even tells a perplexed traffic cop that's his old face in the licence photo. Isnt there any rule to be followed about photo changes etc, when such surgeries take place ? A couple of scenes look contrived near the climax.
Glitches aside, Boomerang  with its neat making, is an interesting watch.