Ispade Rajavum Idhaya Raniyum ( IRIR)  is a love story which will hold you emotionally is the gist of what the speakers said at the press meet today.  Said music director Sam CS ,' All ages will connect to this story. This is my first full love story. I am very satisfied after doing this film. Theres lots of scope for Harish Kalyan's acting in several facets. The story revolves around Shilpa and Harish. Bala Saravanan and Makapa Anand have done a good job at comedy.' 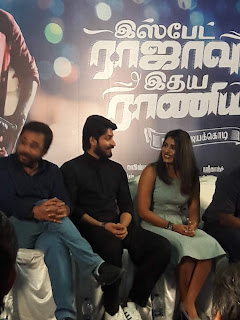 Director Ranjit Jeyakodi gave a lot of freedom to us revealed Bala Saravanan who described  himself as the joker in the film. Shilpa Manjunat of Kaali fame thanked Harish Kalyan for making her comfy in the intimate scenes. 'I have gained a good friend now' she said. She also gave credit toBala Saravanan for helping her and teaching her Tamil during  the shoot. The heroine has also dubbed for her role.
The director said , ' After the release of Melissai I got this opportunity from producer Balaji who waited despite the delay of Melissai. I thought of doing a full love story instead of the original crime story I had planned. The story is interesting. It also has an interesting angle which talks about the spate of violence in today's real life love stories. This will be a breaking free of shackles kind of film for Harish. Shilpa is a hard worker and learnt Tamil for her role.' 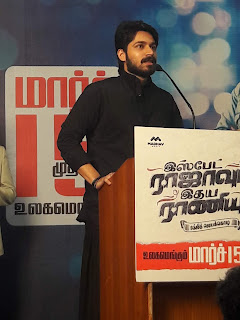 'Im very grateful for this role which director Ranjit said will take me to the next level of angry young man, beyond the lover boy and playful roles In haves done so far,' said Harish.  ' This film will connect with youngsters. The climax touched me a lot.'  Ponvannan has played Harish 's father and described him as having the same energy as the young Shahrukh Khan.
harish kalyan