Produced by RBK Entertainment, Aghavan is directed by APG Elumalai with camerawork by Bala Palaniappan and music by C Sathya.

The film is set in a village giant temple which is at the periphery of a village. The caretaker Marugavel ( newbie Kishore Ravichandran) and his co worker Ezhuthu ( Thambi Ramaiah) fund strange sounds and movements at night, around them. 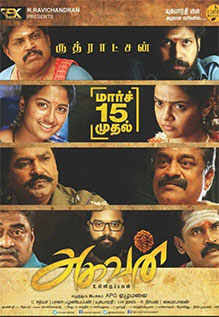 When Murugavel begins to investigate, he finds a link to his past, namely the mysterious death of his brother and disappearance of a friend's wife. When he begins to find clues and follows up on things, a whole plot of stealing temple wealth is revealed. The developmentsAghavama  takes him  back to mythology and history in an intriguing manner. Who are these powerful people  and does Murugavel find a way to stop them is the story.

The first thing that strikes you about thr film is the fantastic camerawork with its rich visuals of amcient temples and aerial shots of various locations.  A sheer delight to view and which gives the film a bigger scale. The actual plot of the story is something different and best viewed without spoilers. The director seems to have done reseaech on the topic added to which is his fictional angle as well.  The 2 heroines ( Nithya Shetty and Chira Sree) as village girls, have a role to play in taking the story forward and have done full justice to thier roles.  The music by C Sathya is top notch and so is the filming of the songs amidst temples and Nature.
On the downside, there is too much time spent in the first half with needless comedy and too many dialogues  by Thambi Ramaiah and others  before the real,  interesting plot is revealed. This adds length to the story which could have been avoided. The  screenplay  sometimes lead to confusion due to varioys flashbacks  thrown in.
Overall, a different story  from the  usual fare.
Aghavan