- March 22, 2019
by Rinku Gupta
Embiran is a love story directed by Krishna Pandi and produced by Panchavarnam Films. 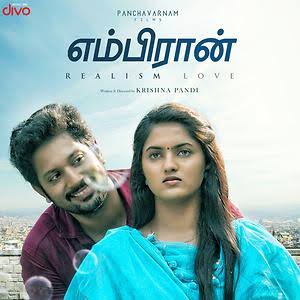 The story centres around a young girl Jaya ( Radhika Preethi) who falls love with a doctor called Priyan ( Rejith Menon) though he has no clue about it. She lives with her granddad ( Mouli) who is s temple priest. By the time she is able to declare her love for Priyan, tragedy strikes. Her grandfather dies and she goes into a comatose state.
In the meantime Priyan finds strange  dreams recurring daily and troubling him. Does he find a solution to his problem? How is it linked with Jaya? Do the youngsters unite ?

Radhika Preethi looks pretty and  innocent just as she is meant to be. She fits the role well. Rejith as the doctor does justice to what is required of him. The both of them make a goid pair.

The camerawork by  M Pugazhenthi gives pleasant visuals though at times the camera lingers too long on close ups. A lot of time is spent focussing on phones, computers, furniture and the like, and the screenplay tends to lag or get repetitive. Though the premise of unraveling dreams is an interesting one, the manner in which the topic is treated and the whole sequence of events of Jaya's treatment seems to be a tad filmi . The dialogues are kept to a minimum which is refreshing. Though 2 songs are well picturised, the bgm seems a tad repetitive.  Its never really clear what Priyans speciality is and the manner in which Jaya tries to approach him seems contrived.  More so when it leads to a tragedy. However, the film does attempt to show that is true love is about caring and how it can overcome all odds.
The film gives off  a 90's vibe. The short crisp duration however, is an advantage.