- March 15, 2019
Based on true events in producer PN Balaram's life, Krishnam is directed by  Dinesh Baboo who has also cranked the camera. 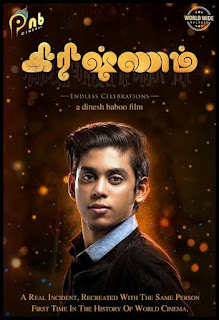 The story revolves around the life of loving parents who dote on thier only child, Akshay ( Akshay Krishnan, son of producer Balaraman). The parents are ardent devotees of lord Guruvayurappa. The son is a carefree college goer who loves his parents very much.
In the midst of a wonderful life tragedy befalls Akshay one day when he falls ill. The doctors in the hospital declare he needs urgent surgery and has only 1 percent chance of survival. What happens after that,  a miracle, is what is revealed in the film.

Thr film is based on the real events in Akshay's life and how he survived imminent  death just be
by his father's  sheer faith in lord Guruvayoorappa and divine intervention. ' It happened in my son's life and I wanted to tell this story to the world,'said the producer.
The filming is well done and the interest in  the story is maintained by the screenplay right till the end. The performance  of the entire cast is good. The  emotional parts are well concieved and executed.

For the spiritually  inclined, the film is a reiteration in belief in the  Divine. Real doctors' bytes in the end-  credits re-in force that the miracle surgery did indeed take place.