- March 14, 2019
by Rinku Gupta
The second film of director Ranjit Jeyakodi, IRIR centres around the story of a young man and through his life, explores the meaning of true love . 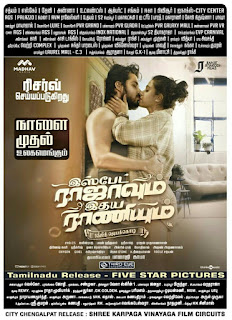 In brief, its about a youngster Gowtham ( Harish Kalyan) who has anger management issues due to his latent anger at his mother having eloped with another man, abandoning him when he was a child. Even as a grown-up he cant come to terms with this and all his rage comes out on others when he is provoked, or in order to defend his friends ( Makapa Anand and Bala Saravanan).

One day a series of events lead to his meeting a girl Tara ( Shilpa Manjunath) whom he eventually falls in love with slowly. Letting her into his world bit by bit he is still afraid she too might leave him one day. But even though she assures him she never will, circumstances  and communication  gaps due to mainly his insecurities,  become obstacles in thier path. His worst nightmare comes true and she does leave him for another man. Frustrated beyond limits he takes to drugs and even prepares to kill her. What happens next? Will true love show the way?

The highlight of the film is the performance  by Harish Kalyan. Every nuance of his deepest thoughts and emotions is conveyed brilliantly through his eyes and body language. He makes the character  and his angst  absolutely believable. The anger, pain, frustration, confusion and love are skilfully portrayed by him, breathing life into the story.The agressive attitude, stylish swag and the potent anger kept in check waiting for an outlet is superbly portrayed.

Shilpa Manjunath does justice to her role but the dubbing comes as a speed breaker in several places.  Though the screenplay helps in creating the magic between the duo, especially in the songs, the chemistry between the duo seems largely lacking. Its difficult to understand whether she is playing a game or truly means her declaration of love in a few places. However, her performance brings a certain maturity to the character as a perfect  foil to his nervous anxiey and insecurity. Seen as taking the inititative in many scenes, the portrayal is a good departure from the norm. Even the way the duo meet and the development of their romance is shown in a  manner different from the usual making it refreshing.


The costume styling of the heroine deserved more attention, for a trendier look, in order to match the young boyish looks of Harish.   One wonders how the patchy make- up, almost white in places , escaped the eyes of the director? Since its a love story of great emotion and depth, centring around the leads, these distracting facets surely deserved a little more attention ?

The character of the father ( Ponvannan) could have been worked upon a but more.  After all the ruckus his son creates its only towards the end he reveals an important detail about his mom, that gives him some respite. The film thus inadvertently seems to highlight the need for emotional support of family and close friends, which is sadly missing for many individuals in a society,  which sweeps issues under the carpet, or terms troubled youngsters as  ' loose' or ' mental' instead of counselling them with wisdom, love and understanding.

The music by Sam CS is a plus. Kavin's camerawork is another highlight, creating the varying moods the film travels through. The comedy by  Anand and Saravanan evokes timely laughter in most places However isnt it  getting repetitive to see such 'friend' characters doing a similar template of drinking, mouthing women-bashing dialogues and being loud and insensitive to the emotional needs of the ' friend' they hang out with' in most films?

However,  IRIR and director Jeyakodi must be commended for the topical message it gives out about the real meaning of true love in the end, especially relevant to the troubled  times we live in. Several topical issues youngsters face in the age of social media are well brought out.  Though there are lags in between, the screenplay moves briskly between the past and present, keeping up the curiosity factor and engaging the viewer. The dialogues too make for a mature love story that seems to explore zones mostly ignored by breezy romances.