I'm in love with Selvaraghavan's craft of cinema - Suriya

The  grand audio and trailer launch of Dream Warrior Pictures' NGK was held  at a  star hotel today. The event was graced by the team which included director Selvaraghavan, Suriya, Sai Pallavi , Yuvan, cameraman Sivakumar Vijayan and editor Praveen KL amongst others. 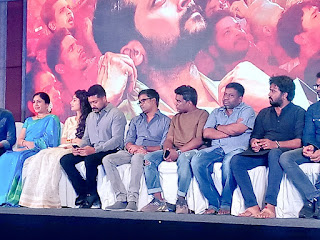 The team members addressed the audience. Cameraman Sivakumar Vijayan said, ' Selva sir is  not only agreat director but also a superb writer. When he gave me the script,  it was like reading a novel. The challenge was to take the camerawork  beyond that. It was like floating  on air with the camera.  For Suriya sir, whatever the lighting and angles, his  extreme performance was breathtaking. Holding long takes was no easy task which he did  superbly.'
Praveen Kl said "After seeing the climax I had tears in my eyes and I had goosebumps." Art director Vijay Murugan said he  was proud to work in this film.   'Producer Prabhu told me not to compromise anywhere and Im very happy about that.  Im thrilled to be working with such a brilliant and supportive director. '
Thalaivasal Vijay and Uma Padmanabhan are also part of the cast. Said Vijay, The film will be an eye opener for the youth.'.
Yuvan Shankar Raja revealed that he was yet to start the BGM and he was really excited to start work on it after having seen the first half.  Sai Pallavi disclosed she was nervous before  the shoot  but once she joined the sets she felt that it should prolong and she should  continue. 'Selva is a visionary.  He has taught me to unlearn whatever I know as an actor. His movies are master pieces. I am a huge Suriya fan and I would keep watching him on sets. He is one in a million in the way he treats people on sets, his passion for cinema and his hardwork.'

Throwing light on the delay of the project Dream Warriors SR Prabhu said , 'The excitement was always high right from the start. People have been anxious about the timeline of the project due to the delay but there were several reasons. Selva gave a bound script. But a similar film came at that time. So he had to re -write the script. Later due to the producer council strike there was further delay. But everyone was very co -operative to dedicatedly complete this project. Fans were always very eager for the updates and Im sure the film will live upto thier expectations. ' 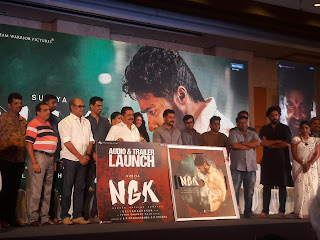 Director Selvaraghavan said , ' Suriya is a wonderful actor. He's a complete director's actor. For every take he would want to give me variety of shots and even for dubbing he would keep working on the best options.'
For Suriya it was a dream come true to work with 'Steven Selva Berg'. ' In 2002 when I met him, since then I have been wanting to work with him and now after 16 years my dream has come true. I fell in love with Selva' craft of cinema after working with him. I would love to work with him again. This is an important film in my career.'
The film is Suriya's first with Dream Warrior Pictures.  He thanked his fans of all the actors and crew  for all thier love for the project.
NGK Suriya