A love story set around 1992 which later moves to 2010, Mehandi Circus is about a young circus artiste Mehandi (Sweta Tripathi) who happens to  come to the village near scenic Kodaikanal where the hero Jeeva ( Madhampetty Rangaraj) resides. 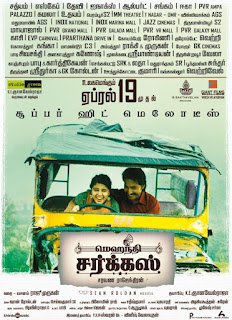 Jeeva is an ardent fan of Ilayaraja and runs a cassette shop in the village and helps lovers find their true love with apt Ilayaraja melodies. His father is a strict, casteist village bigwig.  So when Jeeva falls for Mehandi all hell breaks loose. Caste and class come in the way.
Fearing trouble, her circus owner  father puts an impossible condition for Jeeva. In order to win her,  he must be able to throw knives around her, for the knife act that she participates in at the circus. Jeeva begins to train for this with the help of Jadho, Mehandi's colleague in the circus. But he is unable to pass the test. The couple decide to run away. What happens next? Do they succeed or does someone give them away? Does true love find its way in the cruel world?

The film starts with a flashback portion and rightaway makes us put on our thinking caps as to what would have transpired. The story is told moving from present to past in a most touching, moving and engaging manner. Newbie Rangaraj manages to nail every expression with his eyes and body language and it certainly doesnt look like his first film, so confident is he, as both the younger and older versions. Swetha is refreshing as the breeze and fits her role perfectly. The actor has dubbed for herself adding a touch of credibility to the role of a Maharashtrian girl speaking Tamil, with a lilting accent. The film being a love story, the lead pair's chemistry is vital. The duo manage to convey the innocence and freshness that makes them fall in love against all odds.
The camerawork of Selvakumar SK  is a highlight as is Sean Rolden's music, both bgm and songs. The lilting Ilayaraja melodies added, makes for a heady concoction of love, where logic and reason fall far behind for lovers who only exist for each other, in a world where even Time cannot separate them.

On the flip side the somewhat slower pace and  the climax may be a downer for a few, or the way the youngster wastes himself in drink ( often being shown almost  with regularity on screen of late) problematic,  and some of the situations unrealistic.
Overall, the film directed by Saravana Rajan is a  journey into another world where Time moves at its own unhurried pace. Though slow at times, worth a watch.