Natpe Thunai produced by Avni Movies is the next movie of Hip Hop Tamizha Adhi and expectations were high after his Meesai Murukku. 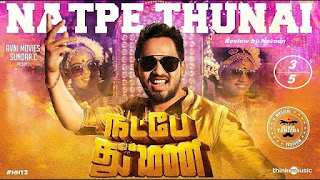 The film, in brief, revolves around Aadhi playing a hockey player who has given up the game due an incident that affected him deeply. But when he falls for a girl ( Anagha) who is a hockey player, fate pushes him towards the game once again. The reason?  A famed hockey ground  in Puducherry will fall prey to the hands of a greedy and corrupt politician ( Karu Palaniappan in a fine performance) who want to work out a deal for a corporate and chase out the teams training there. A hockey coach ( Harish Uthaman nailing it with his superb act) is fighting hard to keep the ground from being sold but they need a group of hockey players to win a match in the final battle. Will they get a team together ? Who will win?

The film keeps hockey as its epicentre and that focus on a sport is commendable. But the focus keeps shifting to a romantic track with incidents that are repetitive and try your patience with nothing new to offer. Aadhi tries his best to play the lover  boy but seems to look ill at ease somehow. He seems more at home with a hockey stick during the matches.  For a film on sports the actors could have  imbibed a better body language befitting the sport. Only Harish Uthaman looks the part of a sportsman. A lot of  time is spent in  duels  with another gang of boys due to the romance angle.

Some clever lines mouthed by Karu Palaniappan are satirical and focus on topical issues and thereby  keep up the interest levels.  His poker faced demeanour add to the effect.

Several You Tube stars form part of the cast but dont generate the laughs nor the effect expected except for perhaps Chutti Arvind to some extent. The film medium needs a different body language and dialogue delivery from the You Tube video format, which they need to accustom themselves to.

The bgm is so loud in places it almost drowns the dialogues. The final matches are well conceived  with high  moments of drama thrown in.  The color palette is bright and colorful, especially in the songs.  With good production values,  its overall a well- meaning film, seeking to entertain while focussing on social issues at the same time.
Natpe Thunai