- April 06, 2019
by Rinku Gupta
Uriyadi 2 directed by its hero Vijay Kumar has been bank -rolled by Suriya's 2 D Entertainment.
The film centres around 3 friends  ( Vijay Kumar playing Lenin, being one of them) in a village, who get work at the Paksino factory nearby. Its owned by a corrupt NRI  corporate giant who knowingly neglects maintainence of old but  vital machinery for profit, which leads to a massive gas leak which kills and maims dozens of poor villagers living around the factory.
Unfazed, due to political backing of corrupt political parties of all hues, he remains out of reach of Lenin and the youth from the village who are shattered by the terrible tragedy and are seeking justice which seems to be eluding them despite protests.  Do they finally get justice and achieve vengeance? 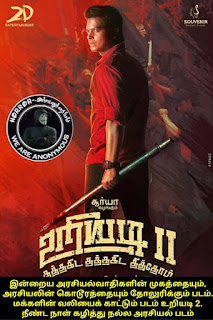 Thr film is hard-hitting and spares no-one, laying  bare the nexus of politics and business,  with the public left to the mercy of corruption and greed. Caste- based leaders are also shown planning their  moves in thier own interests of power and money, couched in the garb of public interest. The lines mouthed by Vijay Kumar ( in a subdued, subtle yet impactful performance) hit home and are bound to be an eye -opener for many. The suspense and building of tension around the chilling tragedy is well concieved though the film feels like a docu -drama in some of the scenes that follow.
However, Vijay Kumar's attention to detail is a highlight, keeping things real, with the camera work offering solid support. Vismaya ( a confident actor) the heroine, plays a doctor and the romance is kept relevant to the story (when she helps the hero in the investigation with direct access to vital inside  info due to her profession).

Govind Vasantha's bgm and songs are superb and a solid pillar of the movie.

However, the too chilling hospital scenes and the climax are not for the faint- hearted.    All the main supporting actors have done a good job,  adding to the realistic feel.
Suriya Uriyadi2