- May 17, 2019
By Rinku Gupta
Monster is the next film of Potential Studios ,directed by Nelson Venkatesan and starring SJ Suryah and Priya Bhavani Shankar along with Karunakaran. 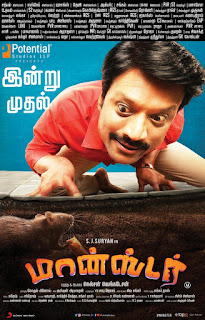 Anjanam Azhagiya Pillai ( SJ Suryah) is a TNEB officer who from childhood has been brought up not to hurt even an ant. Unfortunately marriage eludes him as he gets rejected by many girls. Finally a girl Mekala, ( Priya Bhavani Shankar) who his mother arranges for him to see, agrees to marry him after seeing his good nature.
In the meanwhile, plagued by his landlady and issues like water shortage he somehow manages to buy a good flat in Chennai. With the home of his dreams and the love of his life, everything seems to be going right for him, when disaster strikes.
A rat in his flat creates mayhem and makes life hell for him. In the meantime, the previous tenant of that flat , a smuggler, has some precious diamonds he has hidden there before his arrest. Out of prison, he now hatches a plot to retrieve his stash. Caught in the midst of it all is the innocent hero and the elusive rat who just refuses to be caught. Does our hero get normalcy back in his life? Does he overcome the unbearable rat menace?
Kudos to director Nelson and producers Potential for choosing such an unusual subject. The screenplay keeps you glued to the seat with curiosity as to what happens next. Each character is etched and utilized, from the leads to the villain, nosy neighbors and the supporting cast.
The filming of the portions with the rat are remarkable, especially more so since the film has been shot without any CG. Editor VJ Sabu and cameraman Gokul Benoy deserve full marks. Justin Prabhakaran's BGM is top notch especially in the build up to the rat's appearances, and the ups and downs in the hero's life. The songs are realistically filmed to good melodies.
The way the lead pair meets and thier subsequent romance is refreshingly shown. The performance of Priya Bhavani Shankar with her minute expression changes where her eyes do most of the talking, is exemplary. We hope that the talent of this heroine is well utilized by directors after this film. SJ Suryah carries the film effortlessly on his shoulders playing a compassionate, loving and sensible individual. His expressions in every situation bring out quite another side of the actor. Nelson has utilized comedian Karunakaran's talent in a good way, with just the right amount of wisecracks and witticisms in keeping with the developments on screen.
The film has a clear but subtly told message sans any preaching. The crisp and witty dialogues are a highlight. There are no crass expressions or crudity of language.

On the flip side there is a slight lag when the reappearing rat becomes a tad tedious to watch.
Overall the film is a good watch which wil touch a chord with kids and families alike.