Actor and entrepreneur RK will be launching a VIP Youth India Movement to enter the Guinness Book of Records on 15th August. The event will take place with 1500  people  applying his company's VIP hair color shampoo with bare hands at EVP Film City. The feat will prove that no color will rub off on bare hands of users. The event is tput3d to be held in the midst of celebrities even  from Bollywood. 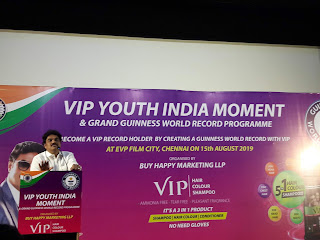 The product is a 3 in 1 with shampoo, hair dye and conditioner.
'This product came into existence because of cinema only because due to losses in cinema I went into business.  In 1991 I started with Kaasu Thanga Kaasu as actor and producer. I ran into financial difficulties but released the film. Then I decided to become an entrpreneur and only then I could continue in films,' said  RK.

About his product which he said is doing excellantly in the market, 'Can anyone touch hair color with bare hands? Usually the color will rub off on hands. I explained about my product to  The Guinness officials in London.  When we have a 'made in India' tag people look differently.  I want to take this product to an international level and make people world over recognise it. Celebs from North also have been invited for this grand event."
" 2 Judges will be coming from London for the event. I will also be participating in the event. We will be giving certificates to all participants and following all rules for the event. "