The audio launch of Market Raja MBBS starring Arav and Kavya Thapar and Nikesha Patel  was held with many celebrities attending. 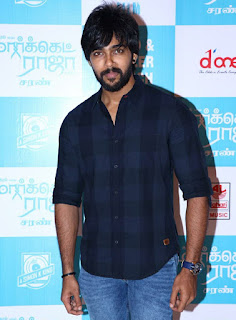 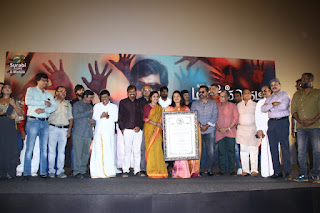 Speaking on the occasion, Producer S Mohan of Surabi Films  said, "I have been  in the industry for many years distributing many movies.  20 years ago we had acquired the theatrical rights of Saran’s movie and from then on wanted to produce a film for him. I am sure Market Raja MBBS will be completely entertaining from beginning till end. Director Saran has done a remarkable job with his screenwriting and direction. Simon K King is giving good  music at lesser remuneration and I request producers to introduce and make use of such good talents. I am sure Arav will become a mass commercial hero with this film and it doesn’t look like his debut movie. I have almost completed shooting another film with him (Raja Bheema) and he has done a temendous job in both the movies." 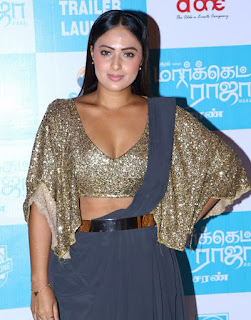 Actor Gnanasambandam said, "Saran is  a multi-faceted personality and the way he writes even a small poem is outstanding and has a beautiful touch. He does everything with passion. Just now producer S Mohan said that his parents are 95yrs old and I wish them much more long life and that they will be here again at their 100th year for their son’s yet another production." 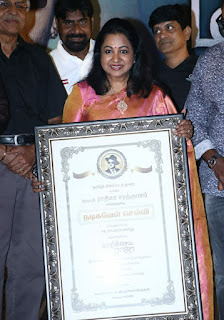 Said Radhika,  "More than feeling honoured, I am emotional. It’s only because of  my father's blessings, I could come so far.  Today’s main focus is Arav and music director Simon K King. I have always been in awe of Saran sir for being so creative in his writing and narration. I think the reason behind this big honour is because of my role in this film that might remind people of my father in a few places."

Actor Sarathkumar said, "I am sure that Arav will have a bright future and Simon King has given great music. I am really honoured to see how Radhika has been a part of this industry for more than 40 years. She gave a huge hope to many actresses that their span as heroine isn’t limited to 5 years, but beyond that."

Actor Nassar said, "I am happy that Radhika has received great honours. I have always admired her as a strong woman and also as an artiste. Simon has given a beautiful music. Director Saran is a filmmaker who remains youthful and thinks fresh with ideas that are  on par with  contemporary filmmakers."


Producer RB Choudary of Super Good Films said, "I am really proud of Mohan sir for producing two films at the same time. I wish Arav captures bigger markets and Simon has already got the name King and will be a winner indeed. Saran has already proved his proficiency of becoming a Vasool Raja."

Director Hari said, “I got the feel of watching the trailer of Amarkalam here and am sure Market Raja is going to be a huge success. Music Director Simon has done a fabulous job.”

Producer G Dhananjayan said, “I  am extremely happy that producer Surabhi Mohan sir is producing a couple of movies  Arav at the same time. It’s really a big boon for Arav for working with a filmmaker like Saran. "

Actor Rohini said, “We as artistes always desire for some challenging roles and I am really happy that we get it in Saran sir's movies."

Cinematographer KV Guhan said, “Usually I don’t talk much during the audio launches, but I was to thank couple of people here. The first one is producer S Mohan sir who has been a great support. The other person is director Saran, my elder brother who has been the major reason for being who I am today.”

Heroine Kavya Thapar said, “I thank producer Mohan sir and Saran sir for giving me an opportunity to be a part of Tamil industry through the Market Raja MBBS movie. Even the ones with 5% contribution towards the film have made the film look fabulous. I thank Arav for being such a lovable co-star.”

Heroine Nikesha Patel said, “Its a huge opportunity for me to be a part of this film as it sure to mark a tremendous comeback for Saran sir. I wish Arav, Kavya and others in the team a big success.”

Actor Devadarshini said, “For the artistes like us who came to industry by 90s, it’s been a dream come true to work with Saran sir. Arav is handsome and really talented and Radhika mam is such an inspiring female artiste.”

Music director Simon K King said, “S Mohan happens to be the major reason I am here for he has been encouraging me from the beginning of my career. I felt Saran sir is so young at heart. That’s the reason why the songs in his movies are so enjoyable and colourful.”


Hero Arav said, “I want to thank Mohan sir for treating me like a son and giving me the opportunity to work in 2 films with him. Being such a great filmmaker, director Saran sir left me fascinated with his down to earth nature. There was no need for an established filmmaker like him to  narrate a script to a newcomer like me. I used to long for Radhika mam to play my mother like how she was for Vijay in Theri. To see that she has donned a mother role like this in Market Raja is awesome.”


Director Saran said, “While my life as director was going into dusk, Surabhi Mohan sir became my dawn. I would like to make a statement that I am back. Music director and lyricist Vairamuthu have been a greater part of my films and now I am happy to see that Simon K King has made me feel like not missing them. I have made Lyricist Rokesh debut as actor in this film. I am happy to work with my brother Guhan and his visuals are terrific. Rohini madam has done a remarkable job in this film. Almost everyone in the star-cast has given a great contribution towards the film and Radhika madam is just awesome. Arav has given an impact of being a well experienced actor. It was really difficult for any actor to give so much variations from one shot to other.”
Arav Market Raja MBBS nikesha patel Radhika Saran