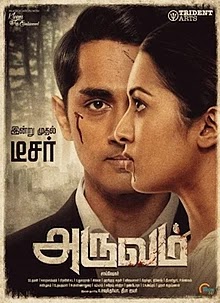 By Rinku Gupta
In director Sai Sekhar's horror thriller, Siddharth plays a food safety officer with a sharp sense of smell while Catherine Tresa , conversely, is born with a smelling disability. The duo meet and as usual the hero falls for her and wants to marry her. But she says no because she feels her disability will weigh down the relationship.

On the other side there is the parallel story of the hero getting on the wrong side of a bunch of villains ( which include the Vedhalam baddie Kabir Duhan Singh) who are into food adulteration, incurring the wrath of our upright hero. When the baddies get together and kill him, he returns as a spirit, to wreak revenge. Does his plan work? How does his lady love react when she comes to know a bizarre truth that has drawn her into this saga?

As Siddharth had promised in the press meet, the horror is not scary, giving you the chills. Instead it has a sympathy angle given the bad vs good angle. The screenplay goes back and forth, in order to rev up the suspense and though it succeeds, it does require  concentration to keep track.
The scenes of the lead pair meeting and the life of the heroine as a compassionate teacher all make for a pleasnt watch, thanks to Ekambaram's camera work. Even the blend of vfx and camera is well done in the horror scenes and especially the climax.

Sathish doesn't have much of a role and could have been utilized better.
Siddharth is aptly cast as the upright food safety officer and does full justice to his role making his decisions look credible.  Catherine looks good and acts well though her erratic lip synch is distracting at times.

The film makes a sincere effort to bring the serious issue of food adulteration and its links to the health care industry, to the fore, for which the director must be commended. The parts filmed on the issue are very engaging and informative and leave a lasting impression.

Had the revenge angle been differently tackled, it would have made for an even more engaging story, especially given the basic theme of adulteration in the background.


A sequel seems to be promised in the end. Lets wait and watch as the premise does have promise and enough fodder for a sequel. For now, the film serves as a good eye-opener, armed with an entertainment angle thrown in for family audiences.
Aruvam Catherine Teresa Siddharth