The next Atlee- Thalapathy Vijay combo Bigil is produced by AGS Cinemas with music by AR Rahman.
The story in brief, is about Michael or Bigil ( Vijay ) who is an avid football player whose progress to national levels, is disrupted because his father Rayappan ( Vijay in a dual role) is a gang leader of sorts. Due to an enmity when his father is killed, Bigil gives up the sport. 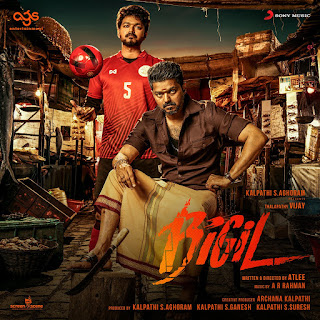 But in a strange twist of circumstances, life takes him back to the game he loves, as coach of an all-women team ( with girls from underprivileged backgrounds), who are grappling to win at the national championship in Delhi. But the girls dislike him, because of his violent background and refuse to play under his coaching. Angel ( Nayanthara) is a physiotherapist who accompanies him to Delhi and helps him tackle the situation he is in. Obstacles to the girls' progress come in the form of Sharma( Jackie Shroff) who is an old enemy of his father. Does Bigil win over the mutinous team ? Do they achieve their goals?


The film is a Vijay -Atlee grand canvas showcasing every aspect of the star and in that aspect a delight for his fans, especially with an added double role as the father Rayappan, where Vijay plays the ageing don with a speech problem, with dignity and gravitas. His message about the importance of sports in weaning away youth from a life of crime is commendable and sets the tone for the movie. The theme of supporting women in sports is also highlighted.

Vijay as the footballer and sports coach excels especially in the scenes with his father, the cutesy romance with a radiant Nayanthara and later as the motivational coach.

The message of empowering women is what Atlee seeks to drive home, and the women's football team scenario is his canvas. The scenes of the matches seem lavishly shot and the grand scale of the film shows all through, be it in the fights, grand sets( like a bridge fight) or matches. The scenes with the acid attack victim's backstory are particularly impactful with good acting and dialogues. The Singapenney song is mesmerizing and inspirational.

On the flip side, Vivek doesnt create much of an impact and Nayanthara could have been given something more constructive to do in the story, given she's there throughout. The run time is a tad long and the long match scenes dont grip you as much as a sports-based film should. Also, did the director have to introduce the body-shaming scene in order to ' inspire' the players?

Overall, a movie fans would welcome, with ample doses of Vijay the star and actor, action, emotion, comedy and a social message.