- October 26, 2019
By Rinku Gupta
Dream Warrior Pictures and Vivekananda Pictures' Kaithi (Khaidi in Telugu) is the second film of Maanagaram director Lokesh Kangaraj, with Karthi in the lead this time.
The film, ( inspired by the Die Hard series), centres around events that happen in one night. Without spoilers, suffice it to say that there is a menacing drug mafia which is on the hot trail of a 900 crore worth  drug consignment seized by the police, which is lodged secretly at thier headquarters. 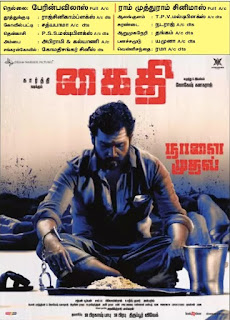 The mafia head Anbudoss ( Arjun Das, a talented find ) gets to know about this and launches an attack to get back the loot and also wreak vengeance on the 5 officers responsible.
Caught up in the midst of the mayhem that follows, is Dilli ( Karthi), a criminal just out of jail on probation after 10 years, en route to see his daughter for the first time. Bejoy (Narain) is the special task force cop who is desperate to protect the drugs from the mafia and uses the reluctant Dilli for the purpose since all the cops have been drugged by mafia. Do all of them manage to get out alive and safe? What happens to the loot? Does Dillli surive and get to see his daughter Amutha ( Baby Monica)?

The screenplay moves at a steady pace, throwing twists at every turn, and is so rivetting, that it ensures you cant take your eyes off the screen. Every situation is neatly tied up and every action, expression and dialogue ( crisp, emotional and funny at times) is there for a good reason. This attention to detail is one of the biggest highlights of the film, and the director's preparation and hard work really shows. In these days of lazy writing, punch dialogues, conveniently placed situations and the usual histronics and stunts we see on screen, many a director could take a leaf out of Lokesh's book. Kaithi is literally an ' edge of the seat' action thriller  for that is where you'd find yourself for the most part! The director has steered clear of frills like song and romance and stays pure to the genre, and yet manages to excite, engage and  entertain the viewer within the parametres  set, never taking audience  intelligence for granted.

Another highlight is the excellent casting, from cops to villains, there is an element of freshness and surprise, keeping one guessing which way things will go.

Sam CS'  background score ( there are no songs and one doesnt miss them at all) underlines each dangerous situation the characters have to pass through. Even the silences speak volumes. Kannan Ganpat's sound mix deserves credit.

Sathyan Sooran proves a wizard with the way he has captured the proceedings of the film shot wholly at night, given the nature of the story. Editor Philomin Raj has done a neat job and the icing on the cake are the stunts by twins Anbariv. Each combat scene is carefully crafted, with enough elements of surprise to keep you guessing, all neatly excecuted by the cast. There are a variety of stunts, from chases, gun fights, to   fisticuffs  (and one glorious scene with a surprise weapon), ensuring there is never a dull moment.


For Karthi, its among his career best performances, after Paruthiveeran and Theeran Adhigaram Ondru. He excels in both the fight scenes and the emotional ones, bringing out perfectly the inherant innocence, honesty, vulnerability, desperation, integrity and hope of a man caught up in circumstances beyond his control. Action and emotion, he carries both superbly in equal measure, in some superbly crafted scenes by Kanagaraj.


Dheena as Kamatchi the lorry owner, deserves special mention. The bonding between the leads brings a lump to the throat in several scenes.
For Narain it's a perfect second coming and he seems the right choice for the role. Arjun Das is a promising find for Kollywood. Ramana, Harish Uthaman, Gerorge Mariam , Baby Monica and the entire cast, contribute thier bit as parts that make up a cohesive whole.
On the flip side, a few mass action scenes of the hero beating updozens of baddies, gets a tad repetitive.

Easily finding a place in the list of best films of the year, Kaithi makes for a not- to- be- missed watch. It also puts director Kanagaraj in the pantheon of ( the few)  directors who  steer from the trodden path, armed with careful preparation, attention to detail, good casting and staying true to the genre and not taking the audience for granted, all simple but vital ingredients for a film to establish instant connect and universal appeal like Kaithi seems to do.
Dream Warriors Kaithi Karthi khaidi Lokesh Kanagaraj