Petromax is the second film of director Rohin Venkatesan after Adhe Kangal. The film is a remake of a Telugu film Called Ananda Brahma. A horror comedy, It stars Tamanaah in the lead with YogiBabu,Muniskanth, Prem, Mime Gopi, Sathyan, TSK, Baby Monekha, Kaali Venkat and others. 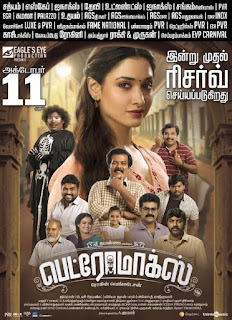 Saravanan(Prem) is heartbroken to find that his mother is dead in a flood. He flies down to India to sell the house he grew up in. But unscrupulous elements convince him there are ghosts there, in order to sell it ata lower price and cheat him. As luck would have it, he meets Senthil  (Muniskanth) who convinces him that along with 3 friends he will stay in that house and prove them wrong, so that Saravanan is not cheated.

What happens to the 4 men who stay in the house ? Who are the mysterious 4 ghosts they encounter? Is Prem really
as innocent as looks?

The film begins on a low note but gathers momentum as the story proceeds. Thanks to the several comedians, there are laughs aplenty in the second half, in the most unexpected of ways. There is a revenge angle too but one can't reveal anything without giving away the story. All the actors have given their best. It would seem that Tamannaah has been perhaps underutilised but that is in keeping with the story. There are moments of lags in a few places but the comical moments make up for it.  Some  scenes  give a repetitive  feel but overall watchable for the fun moments. The horror is not spooky and the emotional angle adds to the family entertainer feel.
Petromax Tamannaah