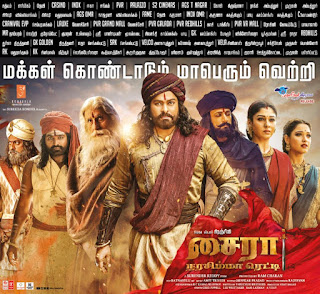 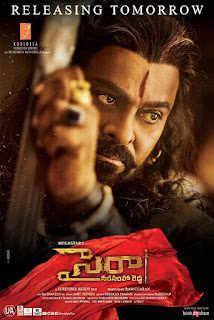 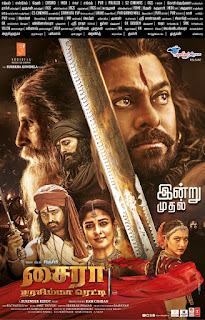 Megastar Chiranjeevi plays the role of the illustrious warrior, in an ambitious project which aims to bring to the fore a freedom fighter whose rebellion preceeded the 1857 Mutiny and whose contribution thus deseves the spotlight.

Made in Telugu and dubbed in Hindi, Tamil, Malyalam and Kannada, the film will no doubt thus take the story to a wider audience, and rightly so.

Without giving away spoilers, the story in brief is about how a Palegaar ( one among 64 in the region) Sye Raa Narasimha Reddy from Rayalseema, moved by the plight of the poor farmers oppressed by unfair, cruel taxation by the British, brings together the local rulers around his kingdom, to fight the oppressors.
In this journey he meets dancer Lakshmi ( Tamannaah in her career best petformance) whom he falls for. But fate has willed otherwise and he has to marry Sidhamma ( Nayanthara, making a resplendant, regal queen).
The movement, which is met with strong resistance from the British, gets off the ground only through Sye Raa's consistent belief in himself and the welfare of his people. His aim is to make it a people's movement and 'Get out of my Motherland' is his refrain to the British.

In this journey, he is helped by his Guru Gosai Venkanna (Amitabh Bachchan in a cameo, perfectly cast for the role), Ayuku Raja ( Kicha Sudeep in a brilliant performance that lights up the screen and keeps you guessing till the end where his loyalties lie), and other palegaars ( played by Ravi Kishan, Jagapathy Babu and others). Vijay Sethupathi is aptly cast as Raja Pandi who comes all the way from Tamil Nadu to help the cause. How do these brave warriors stall the British in their plans? At what cost? What happens to Sye Raa?

The film is a Chiranjeevi show all the way and he ignites the screen with his larger than life presence. His eyes do most of the talking and his measured tones inspire, while his stunt scenes with the British instil awe and fear ( Lee Whitaker, Greg Powell, Ram-Lakshman have done the stunts). Watching him is sheer delight, in every scene, be it with Nayan and Tamannaah or the spectacular star cast of the palegaars, his Guru, the subjects , or the British.

On the flip side, director Surender Reddy's screenplay doesnt allow all emotions to sink in, and moves scenes in a seeming hurry to his goal without allowing  characters and emotions to be explored in depth. This gives a  sense of theatrics to the film in many places.
However, the presence of the megastar and his performance along with the spectacular star cast ( though many have not much to actually do) overrides all such glitches.

Rathnavelu's cinematography is a huge highlight and special mention must be made of the rich detailing of the costume department , make-up and hair ( right down to the fold of a turban, the choice of colors and materials, the drape of a sari or a shawl, or the choice of a piece of jewellery) which not only makes the film a visual delight but lends an air of authenticity and transports us back in time. 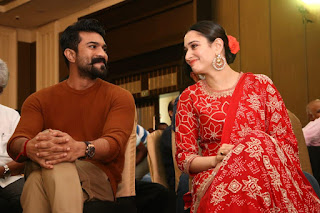 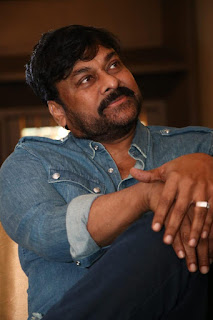 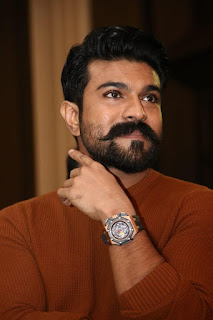 Rajeevan's set and art work adds immense value as does the BGM of Julius Packiam. Amit Trivedi's songs especially the title song is worth mentioning as well.
While Nayanthara brings gravitas to her role with regal dignity and beauty in a finely tailored act , especially in the emotional scenes, for Tamannaah its a career best act, be it her fiery dance scenes, the controlled expresions of love or the sense of patriotism and sacrifice she carries in her eyes and body language.
Watch out for the scenes when Nayan and Tamannaah come together, as also the engaging fight sequences and the grand climax portions which are both moving and inspiring at the same time.
Arvind Swami does full justice to the dubbing for Chiranjeevi.

Especially moving are the end credits ( do stay till they finish rolling) where the makers have showcased a list of some of freedom fighters who sacrificed their lives to give us the freedom we are enjoying ( or misusing perhaps?) today. The least we can do to pay homage to thier memory, is to stay and watch, instead of leaving the hall in a hurry.

Kudos to producers Ram Charan and team for choosing such a subject and infusing a sense of pride when recalling and highlighting great warrriors like Sye Raa who havent perhaps been given their due and taking such a story to the masses in such a massive scale, in five languages, while at the same time inspiring viewers with a sense of patriotism and unity.

For Megastar Chiranjeevi who always wanted to play a freedom fighter and act in a costume drama, the film brings to the fore, how superbly apt he is for such a role, breathing life into the character. One can only be thankful that his wish was fulfilled by his son, albeit after 150 films!
Glitches aside, Megastar in a mega act makes the lavishly mounted Sye Raa a must watch.
amitabh bachchan Chiranjeevi kicha sudeep Nayanthara ramcharan sye raa sye raa narasimha reddy Tamannaah Vijay Sethupathi