Amidst rumours of a delay in Sivakarthikeyan's next film, Hero, production house KJR Studios issued a clarification on social media as follow :

@kjr_studios
All the hard work we've been putting into #Hero is to bring you a film that is socially responsible & a good entertainer. We've been working day & night to do that. Any claim that this film belongs to anyone else but us & you - the fans; is false! #HeroFromDec20 as per plan! 💪 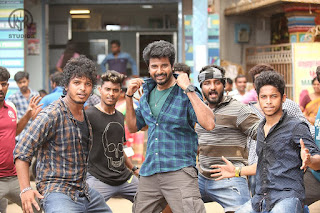 They also issued a press note with a letter from their lawyer, given below:

This is ta notify the public that the Tamil Movie "HERO ' stat'ing
Sivakarthikeyan as Lead Actor is produced by KJR STUDIOS and not by any
other production companies.
Wc have come across certain false messages being circulated in social media
that as if the Tamil Movie t;itled "HERO" is been stayed by the Madras High
Court is utterly false and highly mischievous. It is also denied that the movie
is produced by 24 AM Productions as claimed in these messages and infect 24
AM Productions have itself issued statements earlier stating that they were
never involved in the movie titled "HERO

These people are unauthorisedly using the name, trademark, domain name
and logo of our movie "HERO" with a vied- to tarnish the image and reputation
of KJR Studios. We wish to caution the general public that KJR STUDIOS had
no contact or contract x',hatsoever with either 24 AM Productions or TSR Films
Private Limited ith regard to our movie 'HERO

The public in general are also advised not to fall prey to such fraudulent
activities. \Ve on behalf of KJR STUDIOS strongly recommend that not to
entertain to such solicitations. Should you come across any such fraudulent
incident or have any information regarding solicitation regarding our movie
'HERO please assist us in taking appropriate action to curb such mala fide
activities.

We are also contemplating severe actions against such wrongdoers as per law
and also agdnst TSR FILMS PRIVATE LINlITED for unnecessarily involving and
using our movie name 'HERO ' ithout any authority of law.