Action, directed by Sundar C is the next film of Vishal. He plays an Army officer on a mission to avenge the death of his brother ( Ramki) and his family members , along with his lady love ( Aishwarya Lekshmi) who are killed as part of a sinister political plot.
Aided in his mission by Tamannaah who plays an army colleague, and Sha Ra, his relative, he travels across the world from Turkey to London and Pakistan, to nail the big terrorist ( Kabir Duhan Singh) who is the mastermind. 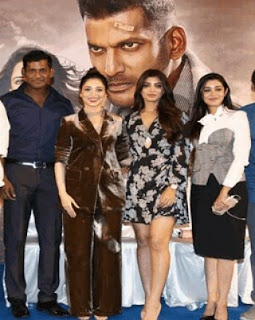 The action blocks by the talented twin stunt masters Anbariv are hi- octane indeed. The scale is lavish and from car and bike chases on roads (and rooftops) to fisticuffs and gun fights to scaling up and down buildings, Vishal and the team of villains ( Akanksha Puri as one of them) have done a good job. The locations are well chosen with an international feel , adding to the scale of the film.

But the hunky Kabir Duhan Singh is under-utilised and wasted in his role and his under- written character fails to  impress.  Why Aishwarya Lekshmi from Mollywood agreed to this role where she has hardly anything to do except follow an old fashioned romance template, is a mystery. Tamannaah who pines for the hero,  is part of a few stunts and a song, is not actually the lady love of the hero. Sha Ra with his loud attempts at comedy fails to elicit the laughs. Close up shots of his mouth and teeth dont qualify as humor and his incessant chatter  takes away from the seriousness and tension of the dangerous situations. The casting of  Yogi Babu ( in a small cameo) as the London- based hacker seems like another attempt at humour, added  to cater to a section of the audiences.

While the action template is fast and furious, it all gets repetitive and seems to stretch on and on, trying your patience. To his credit, Vishal's body build and height add credibility to his role and his risky stunts work in favor of the film.

But a setback is that there is no time for emotions to sink in, or for us to feel the pain of the characters, for everything happens at such a hectic pace with blaring BGM firing up the proceedings. A crisper run time would have perhaps made it more watchable.
Action aishwarya lekshmi sha ra Tamannaah Vishal Yogi Babu