Sethupathi plays Murugan who is trying to be a film actor. He runs into the daughter ( Raashi Khanna) of a rich man ( Ravi Kishan) who is trying to set up a copper plant in a rural area, that will impact the health of the villagers.  In a convoluted tale, the story moves to the village where Tamizh ( Sethupathi again) was murdered with his family, as part of a political plot and rivalry. Nivetha Pethuraj plays his love interest. Are Tamizh and Murugan the same person? If so is the death of his family avenged? 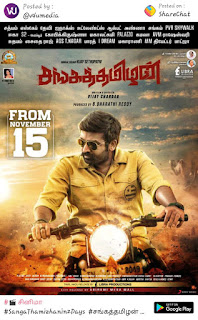 The film seems to stretch forever, with so many stunt sequences that you soon lose count and cease to care after a while. The Soori -Sethupathi combo works well but the film is riddled by too many cliches. There are also so many characters and  artists in every frame, that its difficult to identify with any of them, nor feel any connect.

By way of story and screenplay the film has hardly anything new to offer,  with its politics- corporate nexus and overly long drawn out revenge saga.
Sanga tamizhan Soori Vijay Sethupathi