Raji Nila Mukil Films' Maayanadhi, stars Abi Saravanan as Senthil, an auto driver,  while Venba plays Kowsalya, a middle class, high school student in a small town , aspiring to be a doctor and studying hard for it. Her widowed  father, played by Naren, has beought her up with utmost love and care after the death of her mother and has been a friend and guide all through. 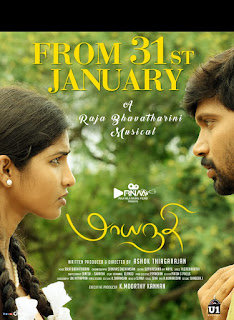 When Senthil comes into her life, quite by chance, Kowsalya slowly develops feelings for him which are equally reciprocated. Despite their bond, she keeps the love a secret from her father and is slowly distracted from her studies as well. Senthil encourages her to study further, but cant stand a separation when she wants to stop meeting him till her exams are over.
Things come to a head one day when the lovers decide to elope and marry in a temple. This is discovered  by Kowsalya's father and he is shattered. What happens to Kowsalya? Does she get to fulfil her aspiration to become a doctor? What happens to Sethil and their future? How does her act impact the rest of her life?

Director and producer Ashok Thiagarajan has several messages to convey. The relationship between a widower father and his daughter can be as tender and strong, replacing the dearth of a mother, if tended with love and care , and this is  well portrayed in the little instances right from the beginning.
How even such a strong and deep bond can be broken with teenage infatuation, and the havoc impulsive actions  can create in people's lives and affect their future, is also brought out. But its  not clear how Kowsalya, who is otherwise shown to be sensible when dealing with boys and even confides in her father about them, is quiet about the issue of Senthil. She takes a huge step in her life, in a rare departure from her normal self and this angle is not explored properly. 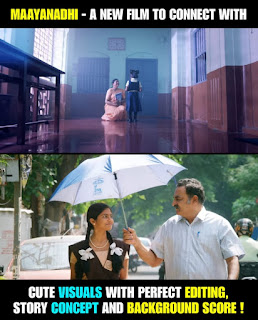 The melodrama is toned down and the situations are aided by good performances by Abi Saravanan, Venba and Naren.
How a lack of education can affect one's prospects in life are brought out by Senthil's character, especially when he realises the enormity of what he has done by eloping and earlier,  by not pursuing his studies as a teenager.

The topic of acid attacks, misguided teenagers and lack of proper parenting leading to crimes at a young age are also touched upon.


The music by Bhavatharini supports the story as does the camerawork of Srinivas Dhevamsam. The production values are good and the film is visually engaging.


On the flip side, the film has one too many moral stories and lessons on good behaviour, which gets repetitive to watch. The sudden change of heart of the normally focussed and sensible Kowsalya is not convincingly brought out. The ending seems rushed and could have done with stronger writing.

But, what is commendable is the choice of subject by the director as also the way he hasnt tried to give a candy floss ending, while at the same time showing a ray of hope in the face of loss.  Maayanadhi is overall a good family film, with a strong social message.