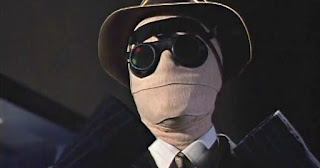 Trapped in a violent, controlling relationship with a wealthy & brilliant scientist, Cecilia
Kass (Elisabeth Moss) escapes in the dead of night and disappears into hiding, aided by her sister (HarrietDyer), their childhood friend (Amis Hodge) and his teenage daughter (Storm Reid).
But when Cecilia's abusive ex (Oliver Jackson-Cohen) commits suicide and  leaves her a generous portion  of his vast fortune, Cecilia suspects his death was a hoax. As a series of eerie coincidences turns lethal,
threatening the lives of those she loves, Cecilia's sanity begins to unravel as she desperately tries to prove that she is being hunted by someone nobody can see.

The film takes the cat and mouse game to a chilling level. How can she outwit a man who is invisible? How can she escape the deadly plans he has for her?
The film uses silences as effectively as sound. The visuals are thrilling, the mostly glass house  setting very  contemporary, adding to the chills and all this, combined with  the low lighting, semi darkness setting in many places, makes the film a sure watch for lovers of sci-fi thrillers. Watch out for  twists aplenty

Katherine Moss' performance keeps you hooked and is the mainstay of the crisp film which moves fast and keeps the gray cells on over-drive as you try to figure out how the heroine can ever get out of the trap she's in. The director has made the 1897 novel seamlessly fit into the cinematic experience of the modern era with his making,  which the audiences of today can enjoy.