Rooby Films' Kanni Maadam marks the debut of actor Bose Venkat as a director.
A Madurai couple elope after an inter-caste marriage  but Kathir 's ( Vishnu Ramasamy ) parents are baying for their blood and come searching for them to Chennai where the couple have found a sanctuary.
But somwhow fate intervenes and Kathir is killed in an accident.  Now his pregnant wife Malar ( Chaya Devi) is left all alone. 2 good samaritan neighbours Anbu and Shankar  ( Sreeram Karthik, Murugan) rescue her but fate has other things in store. What happens next?


Bose Venkat scores as a director not only in choice of subject but also in the handling of it. The  practical aftermath of elopement, all the more so in the case of  inter-caste rivalry, and the tragic effect it can have ( especially on the woman in case the spouse dies) is well brought out through scenes, situations and dialogues which are mature and kept to what's necessary. 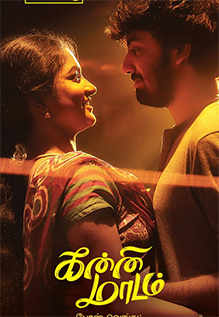 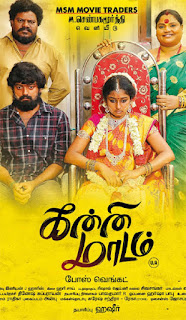 The cinematography by Iniyan J Harris is commendable especially in the one room premises of the couple, creating a magical world amidst all their problems.
Music director Hari Sai has given good tracks which are filmed well.

All the actors have done justice to their roles, displaying just the right amount of naivety, emotion and humor. Chaya Devi displays well the helplessness, fear and love in the face of danger while Sriram as the do- gooder caught in a tough situation handles each emotion well sabs melodrama.
Characters played by Priyanka Robo Shankar, Gajaraja , Valeena Prince and Super Good Subramaniyam are interestingly written and well enacted.
I liked the touch of having female auto rickshaw driver character in the film. All the more so,  in these times, when even leading heroine characters in big ticket films are by and large, not shown having any professional interests on screen.
Here, the practical problems faced by Valeena's character also are well brought out , without any melodrama or hype. 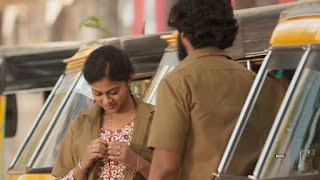 However, one wonders how Malar chose to elope under such dangerous situations, with such a naive and mollycoddled boy who had no idea about the responsibilty of marriage or how to earn his livlihood.

Also, the way an accident is shown to be the cause of a major turning point, seems rather convenient writing.

The make up for the heroine, with the mai ( eyeliner) flowing below her eyes in most scenes was rather distracting and didn't make for pleasant visuals.
The screenplay seems to drag with unnecessary humor which takes away from the tension building up.
The love angle of Sriram and Valeena too is not adequately conveyed.

Overall Bose Venkat manages to score in his directorial debut.