Seeru, is Jiiva's next outing, directed by Rathna Siva and produced by Vels Films International.

Manimaaran ( Jiiva ) is a do-gooder in his town, lives a happy life with his friends and his sister Ilakkiya ( Gayathri) who is pregnant. As luck would have it, he ends up  with enmity of a Chennai -based goonda, Malli ( Varun) who is known for his cruelty. But strangely, when Malli ends up helping taking Ilakkiya to the hospital in time for the delivery in the absence of Manimaaran, the latter is much indebted and goes to Chennai to search for Malli and express his gratitude. 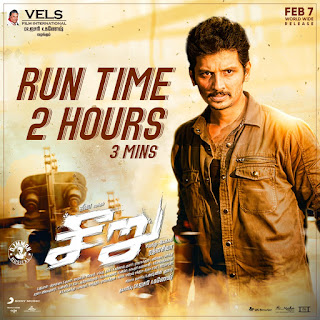 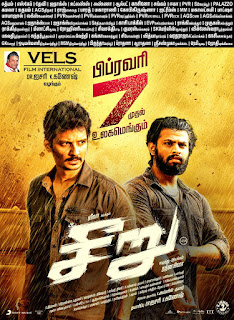 In this processs, he ends up encountering a bigger plot of Malli's hirer, a suave, powerful lawyer Ashok Mithran ( Navdeep) who is trying to kill Malli, because he helped some girls  escape after trying to kill Ashok. Manimaaran runs into the girls as they are trying to escape the clutches of Ashok's ggoons and in the process learns how and why they have attracted the wrath of the powerful lawyer who has already murdered one of them, who challenged his prowess on TV. Since he tried to help his new friend Malli, Manimaaran ends up gaining the enmity of Ashok Mithran as well.
Why is Ashok Mithran so angry? What do the girls want to achieve? Does Manimaaran end up helping them or does Ashok Mithran achieve his goal? 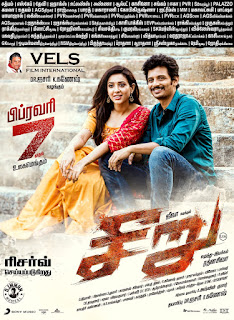 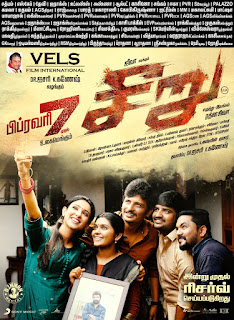 The film is a full on commercial outing for Jiiva, with carefully choreographed stunts  by K Ganesh Kumar, which portray the hero in an all out action avatar. The sister sentiment is strong all through, and Jiiva  fits easily into the brother, friend and do-gooder role. The romance portions with Vaasugi ( Riya Suman) are blink and miss and just seem added to tick the romance box. Chandhini as the school girl Pavitra who is outspoken about turning lawyer and taking on the big baddies, plays the part to perfection, very convincingly. Navdeep seems a good choice as the baddie while Varun is perfect as the strong thug with an emotional side, Malli. His face off with Jiiva and the scenes involving both of them, be it on the phone or in person, are a highlight.

On the flip side, the film keeps travelling between friendship, sister sentiments and the issue of women' studies and the problems faced by girl students in their attempt to educate themselves, never really dwelling long enough on any of them, to establish an emotional conncet. Also, it seems a tad difficult to grasp as to why Mithran would want to kill a school girl whom he thinks could turn a threat to him, when she hasnt even joined law school in the first place. The action scenes though well chereographed are one too many after a point.
Ample blood and gore in few scenes are a bit hard to digest.

The angle about women's safety and women seeking to protect themselves without depending on help from society which doesnt seem forthcoming anyway,  is a point the director has tried to put forward through the student characters, with references to current events. Jiiva and Varun have done a fine job in the stunt and emotional scenes.  The crisp run time of 2 hours is a plus. The screenplay moves at a fast pace,  leaving no room for lags. Enough of twists to keep you engaged.

A film with a social message,  in a time tested template, with family sentiment and action thrown in.