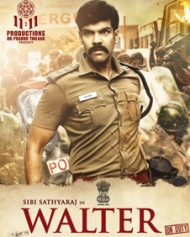 Sibiraj starrer Walter, directed by Anbu, is about a cop in Kumbakonam, who unearths a sinister plot when babies go missing and are later found dead. A local politcian ( Bava Chelladurai) and his family ( Rythvika, Abhishek) in the meanwhile, are bent on protecting their nefarious interests. Babu ( Samudrakani ) is another politico killed in an encounter which leads to the rise of his friend ( Natty) now gunning for Walter.
How are all these activities linked? How does Walter solve the mystery?

Sibiraj's height and body build makes him ideal for the role of a cop and he does full justice to it. Shirin Kanchwala looks cute but doesn't have much of a role.

But a meandering script that seems to move between medical thriller and crime story seems to let him down. The action scenes lack punch and are hardly gripping. Situations seem contrived many a time as do the dialogues. The heroine is just dropped off from the story at one point. The romance itself lacks credibility and chemistry seems zero, except in a song that's well choreographed. There villains fail to impress and Rythvika and Abhishek seem wasted in their brief roles.

Overall the film could have done with a more worked upon screenplay and more than a wafer thin storyline.