Actor  Suriya's  home production Soorarai Pottru is among the most anticipated projects of the year.  This Sudha Kongara directorial which was set to release a few months ago, could not make it to theatres due to the lockdown. 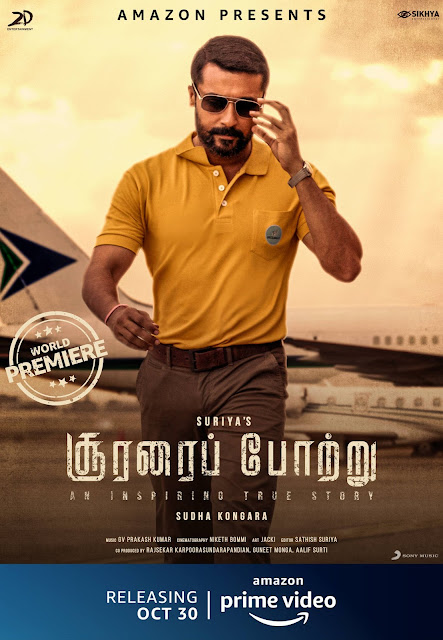 Now, with theatre openings not sceheduled for any time in the near future, Suriya has decided to go for an OTT release on Amazon Prime on October 30th.

He has explained his move in a detailed  press release:

"Even in the midst of all the troubles, a flower blooms" - the words of writer Prabhanjan is a ray of hope. When there is darkness encircling our path, we need to travel with belief towards the glimmer of light at the end of the tunnel. Currently, in the midst of a worldwide trial caused by an invisible virus, we need to fight against the odds with courage and faith.

My production house, 2D Entertainment has so far produced and released 8 films and another 1 0 films are under production. It is the producer's duty to ensure that a film created by investing the creativity and hard work of artists and technicians, reaches the audience at the right time. Only then, will the film and the people who put their souls into it will get the due recognition they deserve.

'Soorarai Pottru a masterpiece of several years of hard work by director Sudha Kongara will be a definite milestone in my career. I strongly believe this film will be well received by the audience and was eagerly waiting to watch it in the theatres along with my ever- loving brothers and sisters. But the current situation does not permit the same. If this long wait continues, the anticipation of the film may get drastically diluted. This will not only affect me but also the people associated with my ongoing productions and their families, who would have to go through unnecessary hardship. Moreover, in these testing times, I feel that my responsibility as a producer exceeds that of an actor.

And so keeping in mind the above factors, we have decided to release 'Soorarai Pottru ' on Amazon Prime Video. I hope that my fellow film industry associates, my beloved brothers and sisters and the people will understand and accept this conscious decision taken by me as a producer. I am sure that 'Soorarai Pottru ' will definitely turn out to be a movie that is close to your hearts. Time will come very soon when people can enjoy watching movies in theatres. I assure and truly believe that I can work extra hard and release one or two movies in the theatres by the time they open.

I have always felt that I should never be the sole person reaping the fruits of my labour, which I have strived to follow till today. I have always believed in giving back to society. Therefore, I would like to share with the needy, an amount of Five Crore Rupees from the sale proceeds of the movie 'Soorarai Pottru.' This 5 Crores will be shared with the needy amongst the public, film industry workers, and the selfless frontline heroes in the COVID-19 war. The details regarding the distribution will be announced very soon. I sincerely request that your love and support shall continue as always! "