The story revolves around a man EB Mani (Santhanam), who in a freak incident, discovers a machine of Time travel which he then uses to go back in Time. He does this  because he is eager to stop his marriage in the past, to his present wife ( Anagha), whom he cant stand any more due to her nagging nature, a far cry from the girl he fell in love with. 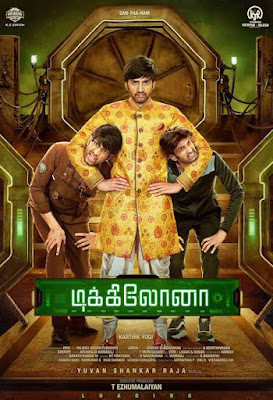 When he goes back and forth in Time, he discovers a truth about himself and life in general which changes the way he looks at his life events.

Santhanam plays a triple role and uses his usual one liners and counters to keep the mood light.  Anagha as the wife and Shirin his other love interest do their bit to fit their roles. But the female lead characters could have been better fleshed out beyond their uni- dimensional personas. The hero is never shown to realise his own mistakes in life and is shown pinning blame on the women in his life for the way his life turned out to be.

Yogi Babu and several  other comedians make an appearance from time to time, but dont generate much laughs beyond a play on words or some situational humor. A lot of the humor seems dated.

The film tries to balance between a comedy and a play on family sentiment, and in the process doesnt rise to its full comic potential, despite the presence of so many comedians  in the film.