Veeraraghavan ( Vijay) is a RAW agent, who gets emotionally affected when a child is inadvertantly killed during one of his counter terrorism ops in POK. He leaves his job and even undergoes  therapy to overcome his feelings of guilt and pain. 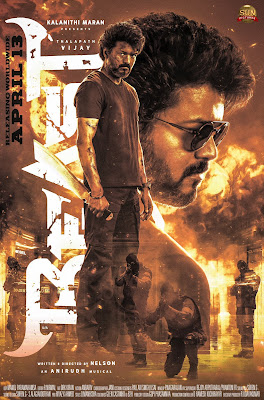 As luck would have it however, he is drawn back into fighting terrorists when a mall he visits is taken over by terrorists who take dozens of hostages. In the events that follow, he is affected by the plight of the innocent  kids in the mall, which prods him to help out the government agencies and try to save the hostages and thwart terrorist attempts to secure the release of  a dreaded terrorist in jail. Does he succeed, is the story.

Vijay looks fighting fit and  dapper in his role. Be it the action scenes, ( watch out for the opening one) the dry wit or the subtle emotions he conveys, his performance is a delight for fans and enhances every scene he appears in.

Pooja Hegde  in her return to Kollywood after a long gap,  looks ravishing, especially in the songs and the chemistry between the duo works out well.

The ace performance of Selvaraghavan as another covert ops agent is a delight to watch, be it the phone banter with Vijay or his irreverent, disgruntled  dialogues with his political bosses and the terrorists.

There is a lot of underlying humor lacing the scenes in the film, be in the the form of VTV Ganesh, Redin Kingsley, Yogi Babu, Sunil Reddy or Sathish. Even the interludes between Pooja and Vijay are spiced with dry humor.

The music of Anirudh  is a  highlight especially with chartbusters Arabic Kuthu and Jolly O Gymkhana, both of which are colorful, foot- tapping numbers with quite a bit of detailing in the background in keeping with the themes.

Manoj Paramahamsa's camerawork is a plus as is the crisp editing by Nirmal and the superbly choreographed action scenes by Anbariv masters.

On the flip side, the lack of a truly powerful villain to oppose the one man army of Veeraraghavan and the lack of  any real tension in the hostage situation act as speedbreakers. A few blood letting action shots maybe upsetting for kids.

The mostly comical act of the politico ( Shaji Chen) and the under use of actors  like Shine Tom Chacko, could have been worked upon. A wafer thin plot could have been better fleshed out.