The film starts with the tragedy befalling a zamindar and his family who are cheated  of their wealth and killed by their trusted employees. They become ghosts and years later manage to enter the lives of one of thier tormentors' progeny   and try to seek revenge.

In the meanwhile another part of the story takes us into a village, into the lives of a father -son duo ( Anandraj- Shiva) who are constantly  at loggerheads to the dismay of the doting mom ( Urvashi).

How the lives of these two families and the vengeful ghosts intertwine by fate, and what happens when  another evil force ( Akshara Gowda) too enters the fray is the story. 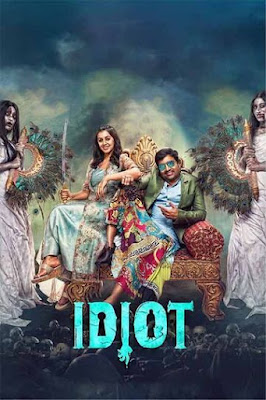 The film is a comedy caper with spoofs and  horror scenes written to induce laughter, especially among family audiences, with the large gamut of comedy stars contributing to laughs each on their own style.

The lively exchanges in the scenes involving Shiva, Urvashi, Anandraj and Kingsley are enjoyable while scenes with the ghouls with a lot of shouting and slapstick comedy,  may appeal to kids.

Nikki puts her best foot forward and suits her role.  Its a delight to see the talented veteran Urvashi in full form and sparring with Anandraj. Shiva is at his witty best as usual, with his poker- faced, witty one liners.

A little more attention could have been given to the  set work of the Zameen house, which could have taken away from the dated feel. Some jokes may feel a tad insensitive.

Idiots, a horror comedy of betrayal, revenge and love is filled with ample laugh riot moments  to entertain family audiences this summer.