The story revolving around the life of Rocky (Yash, looking dapper and every inch the powerful don, carrying it off with total swag) who had killed off opponents like Garuda in part 1, now consolidates his position and power over the Narachi gold mines. 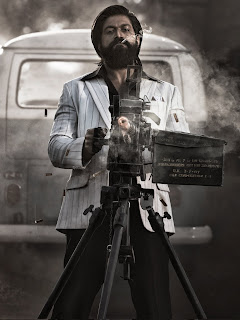 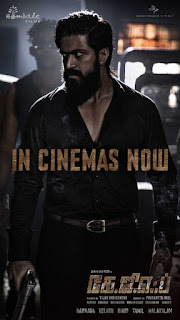 As he becomes the most powerful in the land, the sudden arrival of the utterly evil Adheera (Sanjay Dutt at his menacing best in a Viking- like appearance),  earlier deemed dead, has to be dealt with.  Adding to his woes is Politico Ramika Sen (Raveena Tandon every inch the tough, no- nonsense PM) who is determined to destroy his empire. But the unfazed Rocky has his own plans. How does he deal with his enemies and, safeguard his empire? Does he succeed, is the story. 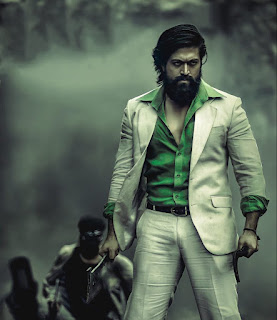 KGF2 has Rocky Bhai aka Yash in full form. Raw, intense and stylish, his swashbuckling presence, is the mainstay of the film, carrying off his role with flair, looking ruthless and emotional in equal measure as the situations demand, the punchlines adding to the mass effect. The action scenes, especially those with Adheera and his army, are powerful, gore-ridden and gripping. The confrontation scenes with Ramika, notch up some intense performances and interesting confrontations. Emotions come to the fore in the  equations between him and Reena and scenes relating to his mother ( Archana Jois).

Director Prashant has gone out all guns blazing in the sequel, with his brand of larger-than- life storytelling and  a riveting screenplay that keeps the surprises coming. Prakash Raj is amongst the new additions to the cast along with Rao Ramesh, Eswari Rao and others.

The strong technical team is the backbone of the film, with excellent bgm ( Ravi Basrur), camerawork adding to the atmosphere off the film (Bhuvan Gowda) art direction (Shivakunar J)  top notch editing ( Ujjwal Kulkarni) and heavy duty stunts ( Anbariv Masters) all elevating the film, turning it  into a majestic big  screen experience.

On the flip side, the decibel levels are on the higher side most of the time and silences are few and far between.

Watch out for a crucial scene after the end credits roll , with the hint about KGF3.

KGF2 draws the viewer into its larger- than- life,  chaotic world with its racy screenplay, intense performances, edge- of -the- seat suspense and mass moments, with Yash  at the centre of it all, keeping the viewer glued to the screen. After the original, the sequel, touted as an even bigger, humungous action entertainer, KGF 2 delivers on its promise of more,  and how!