Madhi ( Vikram) is a brilliant mathematician who is based in Chennai. The best kept secret even his girlfriend ( Srinidhi Shetty) does not know is that he is actually a seasoned aassasin on hire,who travels across the world killing important people, at the behest of his mentor  (KS Ravikumar) using maths as an important tool in his uniquely precise killing style. A series of clues links him to these killings and Aslan, an Interpol agent ( Irfan Pathan in a debut) is hot on the heels of the killer in an investigation aided by a student Judith (Meenakshi Govind). Why is Madhi doing what he did does? What is the dark secret in his life that he is hiding? 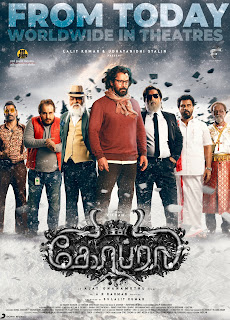 The film belongs to Vikram all the way and the actor revels in the various get -ups that he gets to perform in. His performances, from the stoic silent person to the multi-faceted killer who does everything with mathematical precision, are to watch out for and keep one glued to the screen.

Irfan Pathan makes a good debut with a solid performance and unfolds yet another facet of his talent.

Roshan Matthews plays the cruel villain on a killing spree but the talented actor seems somewhat wasted in a uni -dimensional role. 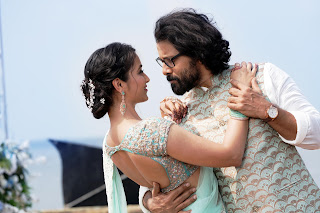 The music by AR Rahman is good but one wishes that the loud  bgm could have been toned down as it drowns out crucial dialogues and gives the viewer hardly any time to connect to the emotions on display.

The screenplay which is racy, is however, interspersed with flashbacks and long drawn out action and emotional scenes which become tedious, especially given the long run time of around 3 hours the film.

Director Ajay seems to have stuffed in too many ideas, which leave the viewers trying hard to catch up. The suspense and twists are interesting but answers to few questions seem to get lost in the complicated situations and hurried pace of the screenplay in the second half.

However, the production values are high, with top notch camerawork by Harish Kannan capturing breathtaking views and the  use of various color palettes to suit the time frames and mood of the scenes.

For Vikram fans, a good outing to watch  Chiyaan in top form, playing various roles in several interesting get- ups with aplomb, in this emotional thriller. Watch out for twists in the tale which add to the adrenaline rush.