Kuzhali, which released on Sep 23rd is a film directed by Chera Kalaiyarasan with Viccky aka Kaaka Muttai Vignesh and Aara in the lead.

The love  story is set in a small village where kids of different status and backgrounds study together. There, a boy and  a girl from two different communities develop affection for each other. Later, when her marriage is fixed with another boy, the young girl decides to run away. What happens to the relationship? Does their love survive the pressures of society? 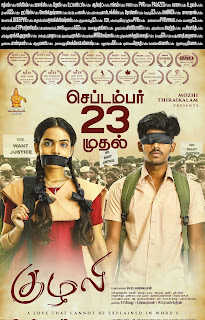 Kaaka Muttai Vignesh has done his part well while Aara portrays the nativity role and the emotions realistically.  Many  supporting  actors are from the village areas itself and the realistic performances add value to the film.

The cinematography  by Shabbir  is handled well while Udhaykumar' music is alluring.

The film touches upon social issues like casteism, and the importance of education,  asking hard hitting questions which are bound to impact the audiences.