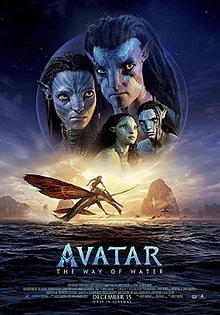 The story takes us back into the world of Jake Sully and Ney'tiri who now are a happy family with four kids and Quaritch's son Spider.  But into this world comes danger searching for revenge, in the form of Miles Quaritch, forcing them to flee their haven and take refuge in an island on the sea.  The new people who give them asylum are now also put  in danger as old enemies are determined to seek out Sully and exterminate him.

Do they succeed? Is Sully able to protect his family?

The VFX is amazing as it takes you from the forest areas to new adventures under the sea. The breathtaking visuals of marine life and the emotional bond the kids begin to forge with the sea creatures and Nature is engagingly and vividly presented on screen as are the interesting rough edges they encounter settling into a new life with new people.

The action scenes, be it on land, underwater or on the warship, are gripping and jaw dropping.

The sci fi tale has emotional highs, especially with the family angle explored in detail while the underlying humor amidst the action and emotion, keeps you smiling.

Cameron builds a different world in this sequel and the  brilliant vfx ensures you stay glued to the screen,  with the cinematic experience growing manifold thanks to the 3D effect.

However,  more could have been done with the dialogues.  The drama could have been escalated at places.  A few emotional and dramatic highpoints in the story dont seem to make quite the impact they should have. Though they are breathtaking,  some underwater scenes could have been trimmed  to make viewing crisper.

On the whole,  Avatar The Way of Water is a visual spectacle of epic proportions, with CG precision that transports you to a fantastical world of Pandora, magically blending sci fi, emotion and adventure and is one immersive experience, that's certainly not to be missed!