Photo credit: Rinku Gupta
Debutante Diana Champika is all smiles about her Tamil release Annadurai ( Indrasena in Telugu) . The actor, who is a Chennai girl, tells you proudly that she has dubbed for herself in Tamil. 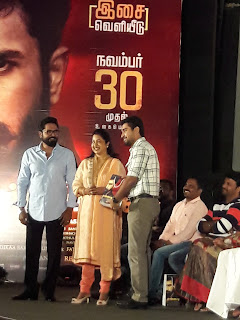 Staying for 25 days at Thirukovillur for the shooting opened up a new world to her she says. " I was very excited since its my first film. So I never found it tedious even though it was a remote location. After shoot, fans used to throng the place to meet Vijay Antony sir.  I was thrilled to see thier love for him," she says.
Diana was impressed with the multi-facted Vijay, " He is a muti-tasker. After shoot we would all be tired. But he would sit down and start editing the days footage immediately. He even fell seriously ill during shoot and one time he couldn't when get up from the bed. But despite that he would use some drips and after an hour come and shoot a heavy action scene! All this was very inspiring for me to see as a newcomer. I learnt about hardwork and dedication by watching him at work." 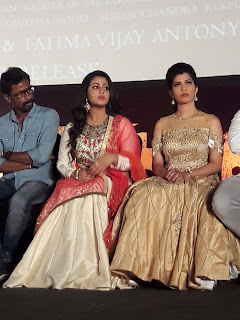 The film, directed by G Srinivasan has Antony playing twins. Diana plays the love interest of Annadurai's brother Thambidurai. "He was a big help with acting tips and would encourage me if I gave a good shot. As a newcomer his down- to- earth nature  put me at ease."
..