The versatile Bollywood actor Huma Qureshi debuts in Kollywood with the Rajinikanth starrer Kaala, directed by Pa Ranjith and produced by Dhanush's Wunderbar Films. In Chennai on the day of release, a visibly excited Huma was eager to catch the film with the local audience and experience first hand, the mass celebration of a Superstar film release. Playing Zarina, the love interest of the young Rajinikanth in the film, her nuanced emotional scenes with him leave a lasting impression. Catching up with the Gangs of Wasseypur actor just after the press screening, we caught a peek into  her experience shooting for 'a film of a lifetime' with Rajinikanth. 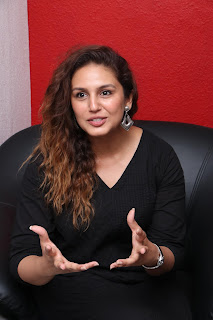 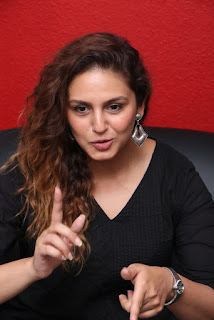 What was your reaction when the offer of playing Zarina in Kaala came to you?
Producer and actor Dhanush is a friend. We have  been talking in the past of doing a film together. So when he called me I thought that it was for a film with him. He said it was not with him but a film even bigger and better, a film with Rajini sir.  I came down to Chennai and met director Ranjith and things fell into place. This is my first Tamil film, my first film with Rajini sir and the first time I am playing an older character.  When I heard the narration  I did wonder a bit, about playing a 50 year old. But then I decided that it would be very stupid of me not to do it just because of that factor and I said yes that very evening. I felt I shouldnt discuss it with people because the more you talk, people put all sorts of fears into you. As an artist you shouldnt have fear. You should just do good work and work with good people.  And like a friend said to me later, even Nargisji was young when she played Mother India. I feel, some films come only once in a lifetime. I am an actor and my work should speak for itself. I am not insecure that I wont get 'younger' roles anymore. I am sure that will contiune to happen.

Your role extends throughout the film right from the flashback to the present. Tell us about working with the phenomenon that is Rajinikanth.

He is just too good. He's a very simple, spiritual person. When I look at him, the way he behaves with his fans and everyone around him its  just amazing. He doesn't care about how is looking, he dresses so simply despite his superstardom! I wish that one day I too could be so simple like him, no matter what is going on around me. His film releases are like major events. The connect he has with his fans is beautiful. Some of my friends sent me videos before I caught the flight to Chennai. People were thronging to the theatres, dancing and singing like a celebration. In Mumbai, women were dressed in special saris to go watch his film, like a festive celebration. That kind of love from fans is very rare and doesn't happen to everybody. I was  just grateful to be around him,  to be able to be a  part of the Rajini family and do a film like this.


Is there anything you have learnt from Superstar Rajinikanth?
I would love to learn his cool moves! ( imitates Rajini's iconic hand movements) The way he takes his dialogues is so unique. I hope that one day I can learn to speak with such flair and conviction.

Which was the most challenging part of the  shoot for you?
Speaking in Tamil was the toughest part! (laughs). I dont speak Tamil but I feel its a very powerful language. I would sit with the associate director Jenny and before every shot, and break down each line of my dialogue and understand it completely before my shot. I would also ask her for extra words to add if necessary, like 'sit down' etc. I owe a large part of my performance to Jenny and to director Ranjith for the way he has written my role and dialogues.
Another challenge was getting into the skin of Zarina. She is a Tamil Muslim, born in Dharavi who later goes abroad and then returns. I was  a bit confused about how I was going to get the right look. But Anu Vardhan has done the costumes and silver jewellery, which were a big help in getting me into the skin of the character. When I wore the nose ring in particular, I somehow finally felt totally into character from then on. 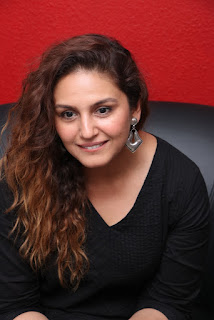 The famous scene between you and Rajini in the restaurant was very engaging. Can you tell us about how you shot for that?
That was the most tough scene. Very emotional. We shot for 2 days for that scene on the rooftop of a restaurant in Kala Ghoda in Mumbai. It was just my 5th day of shooting. Its a difficult scene and only me and Rajini sir were in the shot. So I was doubly nervous! To add to things, it started raining on the rooftop! So I was wondering how I would pull it off. But the whole crew was very patient and made me feel very comfortable. It was only after we completed that scene that I felt more at ease and felt that yes, if I could do this scene, then I could handle the rest of the film as well!

How was it shooting on the Dharavi sets which were created for this film?

I remember, we started the shooting in Mumbai. It was last year, during Ramzan. Rajini sir had come to Dharavi for the shoot and it was total chaos with the crowds thronging to see him, especially in the evenings. Once,my car got stuck and I couldnt reach the shooting spot due to the crowds. Somehow, after  I called the production team  they managed to get me in. So after that schedule Ranjith and team recreated the entire Dharavi set to facilitate shooting.  The first day I walked into that set, I couldnt believe my eyes! It was more than 3kms wide. It looks so real. What you see in the second half of the film was all a set, including Kaala's house.

What are your upcoming projects in Hindi?
Well I can't talk about them now, its better if the producers announce it at the right time. But I am looking forward to my brother Saqib Saleem's film, Race 3 releasing next week,with Salman Khan. I think its a special month for both of us.

Now that you are in Chennai, are you going to watch Kaala today?
Yes, I am most eager to watch it. I am  going to catch the film along with my entire crew for company today!