KADAIKUTTY SINGAM -PANDIRAJ'S ODE TO THE RURAL WAY OF LIFE

Watching the Karthi starrer, director Pandiraj's Kadaikutty Singam, one couldn't help but notice the several ways in which the director has subtly added a sprinkling of elements of the rural way of life , thereby immersing the viewer into a different visual experience and bringing alive  the rural flavour. 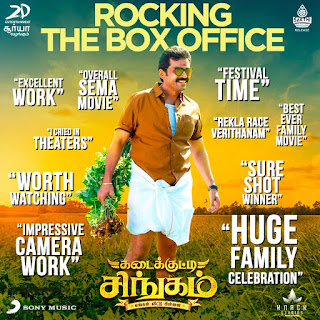 This could be one of the major reasons why the film has appealed to people in such large numbers. ( Recently in one theatre screening the film, fresh  coconut water was sold alongside other refreshments, in keeping with the spirit of the film perhaps! )

For instance, in several frames when you see a woman  character in the film, she is  engaged in farming activity of some sort, which is not usually seen our films. Arthana Binu is seen feeding little goats or her mother is seen sweeping the area where animals are housed when Karthi approaches her in a major scene. 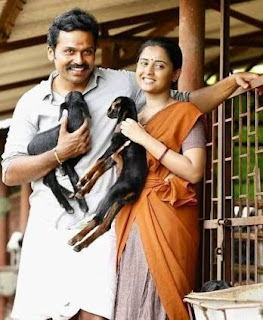 When Karthi goes to meet Bhanupriya she is seen shredding some farm produce in a milling machine and the camera takes care to emphasize that.  To me these seem like little peeks into the rural way of life that resonate with audiences and lend authenticity to the rural angle.
When Arthana Binu serves refreshments  to visitors its in earthen ware, not mugs or steel cups or dabras. She even serves some locally made refreshment , sembarathi poo tea in one scene ,instead of the usual coffee we see in most films.When Karthi has a stunt scene he beats up the thugs with a large, dried coconut tree part which he finds on the site. To me that was an unusual weapon  of choice,   re -inforcing  the rural imagery of the film. 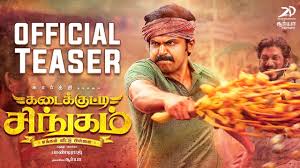 In another stunt scene, Karthi is seen arriving in a tractor, ( instead of say his motorcycle), again showing us how the characters lead thier daily lives. Even in the climax fight Karthi is shown standing on a bridge covered in hay drying under the sun, ( Vaikkol) a common sight in rural areas which again re -inforces the farming background. 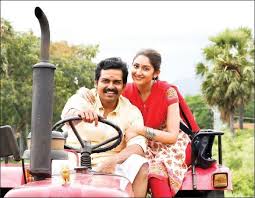 When he shows Sayesshaa to his father for the first time, she is shown bargaining for some local products. Even her name Kannakuiniyal evokes an ethnic dimension as do several other character names in the film. 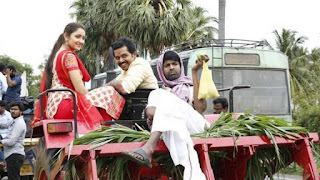 In a college function, the girls including Sayesshaa, are shown performing a local dance form as part of a cultural performance. 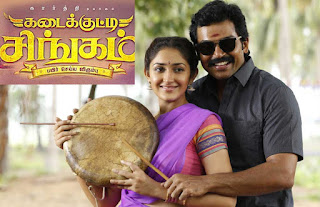 The several women characters too seem to be treated in a different manner. Very often women are seen being slapped or spoken to sharply by the male characters on screen. But here there is none of that. Young or old, they seem to command a position of thier own whenever they appear on screen.  Priya Bhavani Shankar is seen riding a motorbike or taking photos with a selfie stick, very much in keeping with the times. 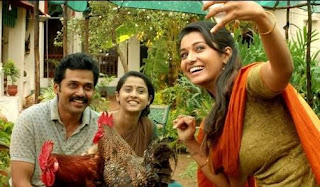 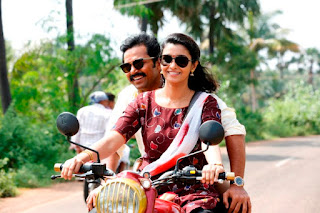 Even the patti is seen riding pillion on a motorbike with karthi.

These are just some impressions gathered after watching the film. 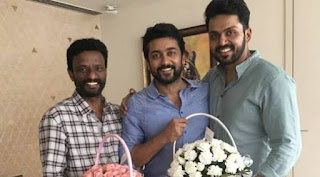