Ghajinikanth is the Tamil remake of the Telugu, Nani starrer, Bale Bale Magadivoy, a comic caper. The Tamil film, directed by Santhosh P  Jayakumar, has stuck largely to the original, except for a few comic lines added to suit the local flavor. 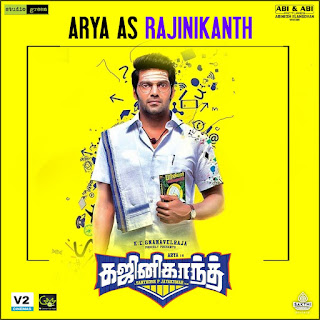 The story revolves around a boy, Rajinikanth ( Arya) who is forgetful right from childhood. If his attention is diverted by something, he is bound to forget what he originally set out to do. Due to this he misses out on many suitable marriage alliances, including one with the heroine, when her father (Sampath in a distinguished role) comes to meet the future bridegroom.  As luck would have it, Rajinikanth meets with and falls in love with  the heroine Vandhana  (Sayyeshaa) who happens to be the daughter of the very man who rejected him as a future son-in-law.  She is totally unaware of his forgetful nature, as the hero manages many a cover up in the nick of time everytime. Does he manage to win her love  and get the green signal from her dad for the wedding, forms the story. 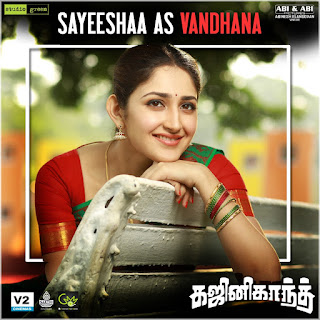 The situation of Arya’s forgetfulness gives ample scope for goof-ups and laughs and the director has used them to advantage. His two friends, played by Karunakaran and Sathish support his love and help him in many a tough situation, turning them into advantages for the hero.  The scenes with Sathish, Arya and Sampath, especially,  elicit many a laugh.

The supporting actors Naren and Uma Padmanabhan as Arya’s parents are well cast and the scenes where they try to keep the secret from Sampath are well  enacted to bring out the laughter.

Naren is refreshingly cast in a different role from the usually serious ones we see him in, on screen. The film makes us  wish that actors  like Naren and Sampath would be cast more in roles beyond the usual  loud mouthed, vicious characters, thereby showcasing the range of what they are capable of. The pre-climax scene where Sampath confronts Arya is especially one to watch out for.

Sayyeshaa looks gorgeous in every scene and  playing a dance teacher, amply showcases her natural penchant for dance. Her expressions are cute and her pairing with Arya is fresh and therefore interesting.  Arya looks good and carries the role well, with a sincere performance.

The camerawork , art direction and color palette overall elevate the mood and add to the feel -good factor of the film.

On the fiip side, there are a couple of double entendres thrown in, which may not appeal to family audiences. Not all the gags elicit laughter and Arya is on a sticky wicket in some emotional scenes.

But overall the film is a good family entertainer from producers Studio Green.